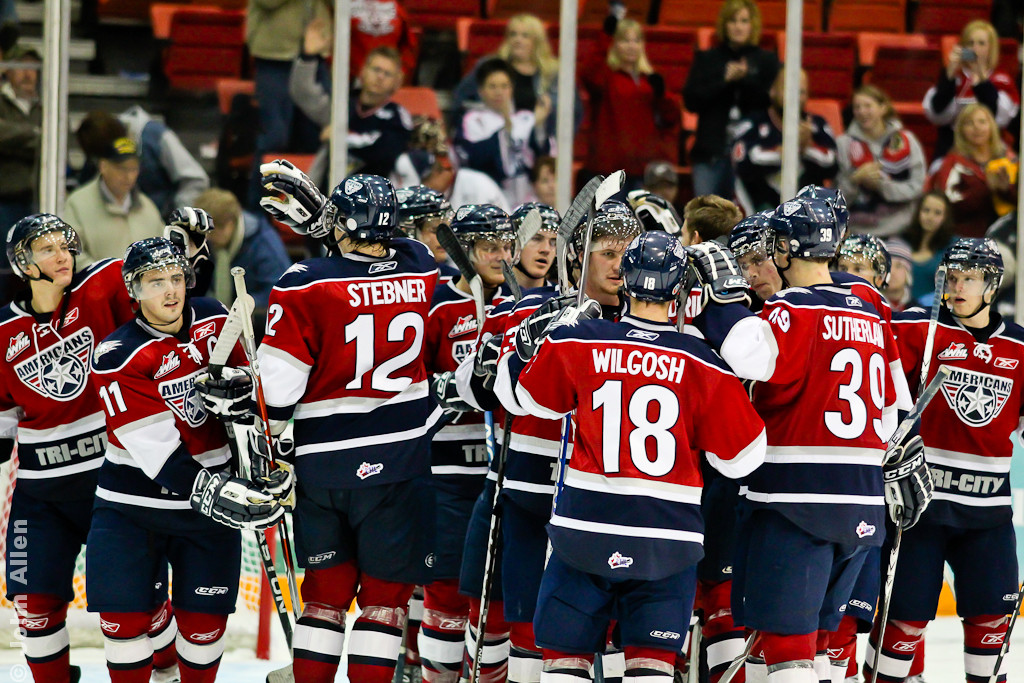 KENNEWICK, WA – Back in front of their hometown faithful, the Americans finally found a way out of their slump.

Brendan Shinnimin and Mason Wilgosh each scored twice, Drew Owsley stopped 27 shots and the Tri-City Americans (12-8-1-1, 26 pts) blasted the visiting Spokane Chiefs (10-9-1-1, 22 pts) 8-3 in front of  5,818 fans at the Toyota Center.  With the win, the Americans snapped their longest losing skid since the 2005-06 season.  It also evened the best-of-12 season series at two games apiece.  Meanwhile, the Chiefs dropped their second game in as many nights after losing in a shootout in Seattle on Friday.  It’s also the last meeting between the clubs until the annual New Year’s Eve affair in Kennewick, a span of nearly six weeks.

Tri-City hit the ground running Saturday, and never looked back, using two two-goal bursts to  pull away in the first 20 minutes.  At the 6:56 mark, and on the power play, the Americans got on the scoreboard first when Patrick Holland redirected a Justin Feser shot past Spokane starter James Reid.  On the ensuing face-off, Wilgosh drove hard to the net, putting back a David Conrad rebound seven seconds later, to quickly put the Americans on top 2-0.

Spokane, however, found a response just past the midway point of the period.  With the puck loose at the near post, Mike Aviani kept banging away, eventually nudging it past Owsley to pull the Chiefs to within one.  But, it would be as close as Spokane would get in the game.

Just 30 seconds after Aviani’s goal, and back on the power play, Connor Rankin took a great, no-look pass from Adam Hughesman and beat Reid to puck Tri-City back on top by two.  Only 3:36 later, Holland found Shinnimin camped backdoor on Reid, who buried a near empty-net shot to make it a 4-1 game headed into the first break.  Then, with 7:25 gone of the second period, Jordan Messier’s 13th goal of the season chased Reid from the game.

With his power play marker with 3:18 remaining in the second, Spokane’s Tyler Johnson made it a 5-2 game.  But, 42 seconds later, a seemingly innocent wrist shot by Drydn Dow from the left circle slipped past back-up Mac Engel, as Tri-City retook their four-goal lead.  Then, with 1:01 left in the frame, Feser broke out Wilgosh, who fired a backhander past Engel, making it a 7-2 game.

Spokane and Tri-City exchanged goals in the third period, as Tanner Mort scored just 49 seconds into the third before Shinnimin recorded his second goal of the game, seven minutes later, to cap the scoring.

Owsley, who won for the first time since October 29 in Everett, finished with 27 saves on 30 shots.  Meanwhile, Reid, who was tagged with the loss, and Engel combined for 19 saves.  Tri-City finished the night 2-for-4 on the power play, while the Chiefs went 1-for-3 on the man-advantage.

Coming off two solid performances, Tri-City will now look to wrap up their tripleheader weekend tomorrow, November 21, when they host another division rival, the Everett Silvertips (10-8-1-3).  Game time is 5:05 p.m. at the Toyota Center.  The Silvertips, winners of their last two and four of their previous five, evened the 10-game season series with Tri-City at 1 last week, with a 5-2 win at Comcast Arena.  However, the Americans hold a 22-10-1-1 all-time record at home vs. the ‘Tips.  Of note in the series, five of the last six games between the clubs have been decided by just one goal.  Tickets are available through all Ticketmaster outlets, including online at ticketmaster.com, the Toyota Center box office, or all Fred Meyer outlets.  The game will also be broadcast live on NewsTalk 870 AM, starting with the Sterling Savings Bank Warm-up Show at 4:45 p.m.