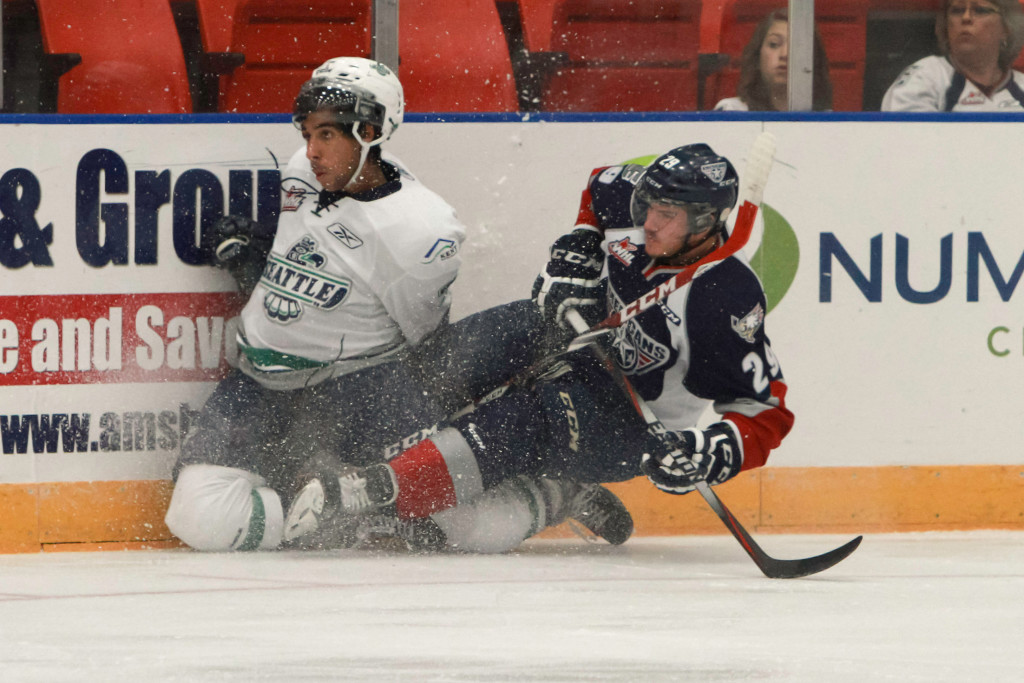 Everett, WA- The Tri-City Americans (1-0-0-0, 2 pts) battled with the Seattle Thunderbirds (0-1-0-0, 0 pts) in each team’s preseason opener, but Vladislav Lukin’s shorthanded goal late in the third was the difference, as the Americans earned a 2-0 win at Xfinity Arena.

The first period was filled with shots, as the teams combined for 27 shots, 16 of which were for the Americans. Seattle’s Taz Burman stopped every shot he faced, along with Evan Sarthou turning aside all 11 Seattle shots to keep the game scoreless after one period.

There were less shots in the second period, as the Americans recorded five of the 12 shots in the period. Tri-City had two power play opportunities, but couldn’t capitalize as the game was scoreless heading into the final period.

In the third, it was a tense battle to see which team would get on the board first. Parker Wotherspoon went to the box for tripping with 3:55 remaining in the third. The Americans were able to get a scoring chance shorthanded, with Vladislav Lukin firing the puck top shelf to put Tri-City ahead 1-0. Seattle pulled the goaltender to try and score an equalizer, but Parker AuCoin sealed the win with an empty net goal on the power play.

Seattle recorded 31 penalty minutes and couldn’t convert on any of its four power play chances. Tri-City was 1-of-6 with a man advantage while spending 27 minutes in the penalty box.

Evan Sarthou stopped all 16 shots he faced. Beck Warm came in midway through the second period and stopped all 11 shots fired his way to earn the win. Taz Burman stopped 32 of 33 shots in the loss.

Tri-City will be back at Xfinity Arena tomorrow, Saturday, Sept. 5, to face the Portland Winterhawks in both teams second game of the Everett Preseason Tournament. Game time is at 11:30 a.m. The Red Lion Hotels Pre-Season Tournament starts next Wednesday, Sept. 9. Ticket packages are available in the Americans office or come to the Toyota Center Box Office to purchase individual game tickets.