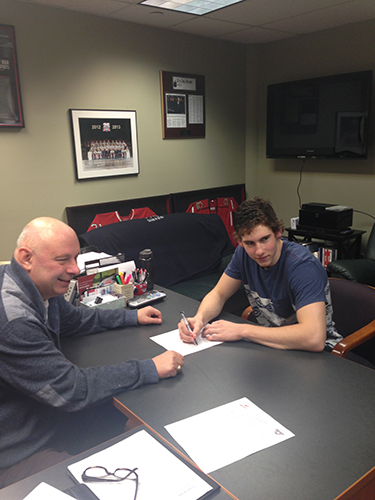 Roy, a 6’2 180-pound forward from Kimberley, British Columbia, played the 2013-14 season with the Lethbridge Midget AAA Hurricanes, competing in the Alberta AAA Midget Hockey League. Roy was drafted in the 5th round (95th overall) in the 2013 WHL Bantam Draft.

“Our scouting staff has done a terrific job in identifying a player like Jordan,” Americans’ Head Scout Barclay Parneta said. “He has shown a tremendous desire and ended up winning rookie fitness testing at camp this year, combined with an extremely strong on ice performance made it easy to see he is the type of player/person that will have success.”

The Americans are pleased to announce that 2014-2015 Season Tickets are now on sale!  Enjoy the best seats – and the best rates – in the Toyota Center! Call (509) 736-0606, visit AmsHockey.com or drop by the Americans offices’ at the bottom level of the Toyota Center for more information.