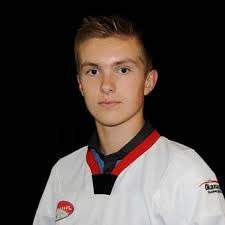 Rasmussen was drafted in the 1st round (7th overall) of the 2014 WHL Bantam Draft.

“Michael is an elite player in the 1999 age group in Canada,” stated Tory. “He is a big, skilled forward with tremendous leadership capabilities. We are pleased that Michael and his family have chosen our organization and the WHL for his future hockey development and the pursuit of his goals.”

“I am excited about my decision to sign with the Americans and get started on my WHL journey,” Rasmussen said. “I have been very impressed with the entire organization since being drafted and the plans they have for helping me develop going forward. I can’t wait to join the team and start playing.”

“I first saw Michael play early last season when he arrived at the Okanagan Hockey Academy,” Rasmussen’s agent, JP Barry said. “I liked what I saw the first few shifts. Michael is an intelligent young man who leads by example. He has terrific size, elite skills, great skating ability and he does this while playing a physical, power forward game. The Americans now have another top prospect to prepare for the future.”

Rasmussen will join the team on Jan. 21 in Kamloops and can play in five regular season games until his club schedule is over.