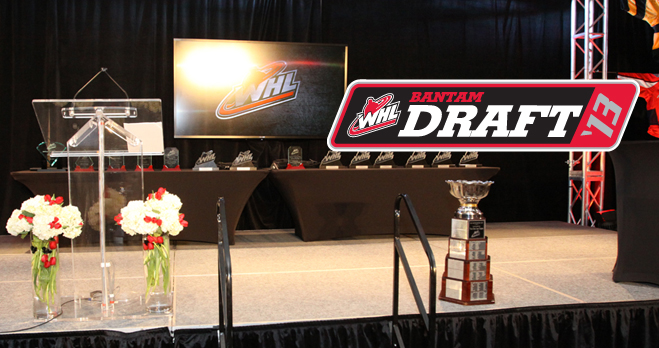 Aucoin, listed at 6’0 and 176 pounds, became the first forward taken by Tri-City in the first round since Connor Rankin (2009) after posting impressive numbers in his bantam year.  Serving as the team captain of the Calgary Northstar Sabres, Aucoin appeared in 33 regular season games and totaled 63 goals and 87 points.  The Calgary, Alberta-native’s 63 goals this season is second most in Alberta Major Bantam Hockey League history, second only to current Portland Winterhawks forward Ty Rattie’s mark of 75 in 2007-08, while finishing 3rd in the AMBHL scoring race.

In Round 2, Tri-City picked up another offensively talented forward from Alberta.  Nolan Yaremko (29th overall), a 5’11 178 pound left wing, was a member of the Southside Athletic Club Southgate Lions of the AMBHL who captured the Alberta and Western Canadian AAA Championships.  Yaremko finished 13th overall in AMBHL scoring, after racking up 28 goals and 69 points in 33 regular season games.

Then, with two picks in the 3rd Round, Tri-City got defensive, taking two blueliners four picks apart.

With the 59th pick, the Americans claimed Mark Drohan of the Calgary Bisons.  The 5’11 143-pound Calgary-native collected seven goals and 15 points in 28 games for the Bisons, which won the AMBHL Challenger South division title.

Then, with pick #63, Tri-City selected Dylan Coghlan from Nanaimo, British Columbia.  The 6’1 174-lb. defenseman spent the 2012-13 season with the Nanaimo Clippers of the Vancouver Island Amateur Hockey Association.  Coghlan played in 35 games for the Clippers, registering 18 goals, 44 points and 72 penalty minutes.

Of the 10 players selected today, the Americans grabbed five forwards, four defensemen and one goaltender.  Tri-City also selected one player from the United States (Ferrario), which marks the fifth straight season that the club has drafted at least one U.S.-born player, five from Alberta, two from Saskatchewan and one each from British Columbia and Manitoba.

Notes: Morgan Geekie is the son of former WHL’er Craig Geekie, who played three full WHL seasons from 1991-1994.  The elder Geekie played two full seasons with the Brandon Wheat Kings before spending his final WHL season with the Spokane Chiefs…Anea Ferrario of the Colorado Thunderbirds is participating in the same program that produced recent Americans’ signees Brandon Carlo and Riley Hillis and current prospects Michael Eyssimont and Troy Terry.  Ferrario’s coach is NHL Hall of Famer, Adam Foote, who played 19 seasons in the National Hockey League, 13 of the those seasons were spent with the Colorado Avalanche…During today’s Draft, the Americans also announced that they traded prospect and former bantam draft pick Tyler Mrkonjic to the Prince George Cougars in exchange for a 4th Round pick in the 2014 Bantam Draft.