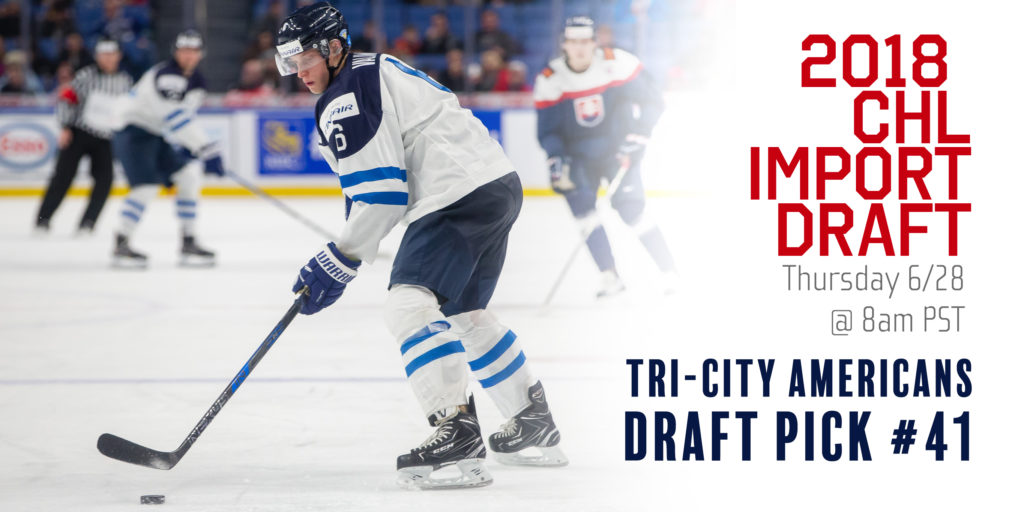 The Tri-City Americans will look overseas on Thursday as they take part in the Canadian Hockey League’s 2018 Import Draft. The annual draft gives teams from all three CHL leagues (the Quebec Major Junior Hockey League, Western Hockey League, and Ontario Hockey League) an opportunity to select the rights to players outside of North America.

This year Tri-City will be able to draft only one import player. Americans General Manager Bob Tory has been preparing for the selection since last October. Ideally, the organization will select a player capable of making an impact on the upcoming season, but the process is complicated.

“The scouting gives you a base of players you’ve seen, but many of the players selected in the import draft have not been seen; they have been recommended by agents,” explained Tory. “It’s fortunate if you’ve been able to see the player because then you have your own evaluation – not just reports from an agent or scouting service. It’s difficult; not a normal scouting process.”

The risk of the draft is selecting a player that doesn’t report. Many of the players being scouted are already under contracts in their home country and can’t come play in the CHL, and some are simply uninterested.

“Most of the players know very little about the CHL. The only information they get is from their agent. Some want to come over in their draft year because they think it will help them with the NHL draft. Some want to come over the year after they’ve been drafted because they think it will help acclimatize them to the North American game,” said Tory. “Most of the them don’t speak English initially. They learn the language when they get here.”

The draft is a high-risk, high-reward opportunity.

Defenseman Juuso Välimäki (Finland) was drafted 14th overall by the Americans in the 2015 CHL Import Draft and has been a core member of the team since arriving in Tri-City. This past season Välimäki tallied 45 total points (14G, 31A) in 43 games, and played a major role in the Americans recent playoff success with 17 total points (4G, 13A) in 12 games. Välimäki, who turned 19 in October, was selected 16th overall by the Calgary Flames in the 2016 NHL Entry Draft.  His NHL status makes his return to Tri-City tentative and gives the Americans a selection in the import draft.

Roman Kalinichenko (Russia), also a defenseman, was the second import player on the Americans roster this past season. Tri-City selected Kalinichenko 36th overall in the 2017 Import Draft. During the 2017-18 season he played 44 games and had 10 total points (1G, 9A). Kalinichenko is expected to return to Tri-City and play a significant role on the Americans blueline.

“We hope to get a quality player. Sometimes you can focus on a positional need because the player is coming to play right away. Not like the Bantam Draft where players are two or three years away. But at the same time you want a quality player – a guy in the top half of your line-up, not just a depth player. So generally you look for the best player available.”

The two-round draft takes place virtually and will begin Thursday, June 28 at 8 am PST. All three CHL leagues take place in the draft. The order is set based on last year’s standings and will rotate through each league. The QMJHL’s Saint John Sea Dogs will pick first this year, followed by the WHL’s Edmonton Oil Kings picking second, and the OHL’s Sudbury Wolves picking third.

Tri-City is set to pick 41st overall, but will actually pick higher. The CHL limits teams to two import players, and as a result teams that have two returning import players won’t take part in the draft allowing other teams to pick sooner.

This year’s draft will permit teams to select import goaltenders for the first time since 2013. The four-year ban was implemented to increase development opportunities for Canadian netminders. The addition to the draft will widen the selection of quality available players.

You can stay up-to-date on the Americans selection by following our social media and amshockey.com.