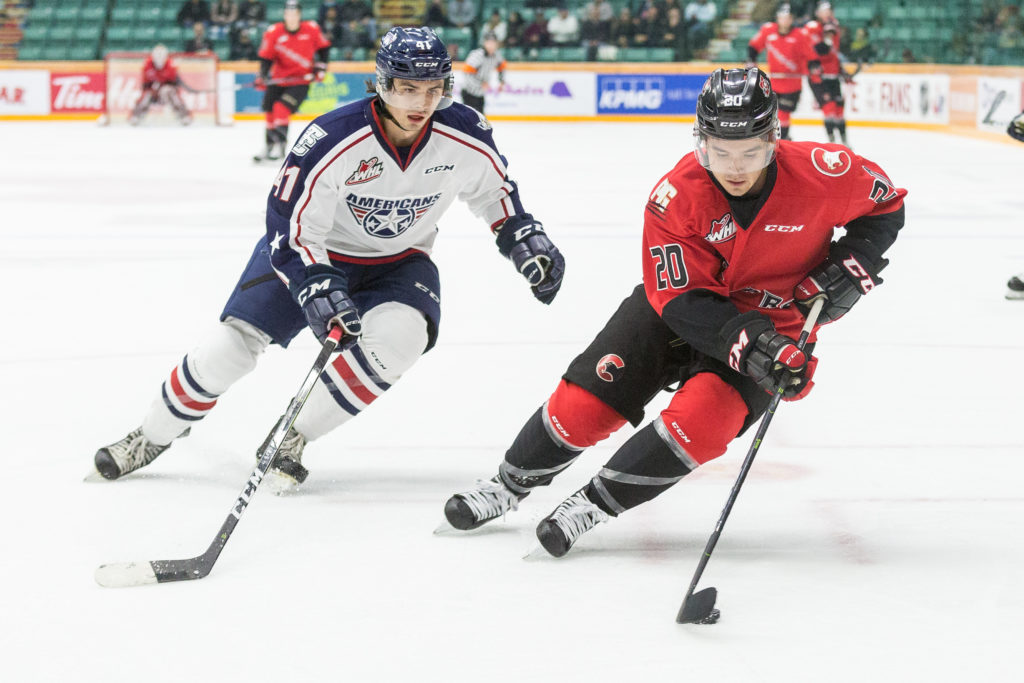 Wil Kushniryk wasted no time scoring his first goal with the Tri-City Americans. The 18-year-old forward was acquired by the team yesterday from the Kelowna Rockets. He opened tonight’s scoring 13:58 into the game, assisted by Nolan Yaremko and Roman Kalinichenko.

Prince George’s points leader Josh Curtis was able to tie the game at 17:57 for the Cougars, their only goal of the game. Tri-City was out shot 12-9 in the starting period.

Brett Clayton scored his first goal of the season at 3:52 second period assisted by Captain Yaremko, giving the Americans a 2-1 lead. Prince George led shots again in the second period, 13 -7.

The Americans started to pull away early in the third period. Parker AuCoin scored at 1:31 for tonight’s insurance goal, assisted by Krystof Hrabik and Sasha Mutala.

Rookie Blake Stevenson took three shots before scoring bar-down on Cougars goaltender Taylor Gauthier. The goal, his second of the season, came at 15:23, assisted by Connor Bouchard and Riley Sawchuk. The same line turned around and scored the final goal of the game at 17:57, this time it was Sawchuk with the goal, assisted by Bouchard and Stevenson.

Both Tri-City and Prince George were 0/4 on the power play. The two teams currently have the bottom ranked power plays in the Western Hockey League.

The Americans stay in Prince George and play the Cougars again tomorrow night.