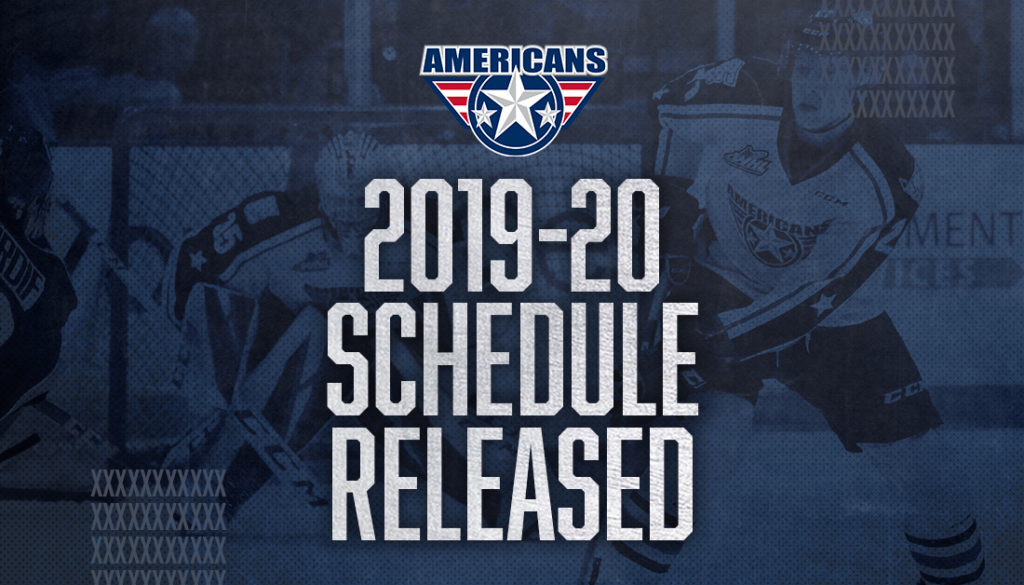 KENNEWICK, WA – The Tri-City Americans, in conjunction with the Western Hockey League (WHL), announced their full schedule for the upcoming 2019-20 season today.

The Americans will start their 2019-20 campaign on the road and play all four U.S. Division rivals (Everett 9/20, Portland 9/21, Seattle 9/27, Spokane 9/28) and Kelowna (10/2) before returning home. The season will kick off in Everett on Friday, September 20th for the Silvertips’ home opener, a rematch of last year’s heated first round playoff series. This will be Everett’s first home opener against the Americans since the 2007-08 season.

Returning to Tri-City, the Americans will kick off their 32nd season in the Mid-Columbia on Saturday, October 5th at the Toyota Center against the Spokane Chiefs. The two teams will match up a total of twelve times. In addition to a competitive game between the two rival teams, Americans fans can look forward to a live band, pyro show, and a variety of activities around the concourse. The Americans will also be unveiling the Toyota Center’s two new 41-foot wide LED video boards.

Plan to spend your weekends at the Toyota Center, as 85% of the Americans’ 34 home games (29) are scheduled on Friday, Saturday, and Sunday. In total the weekend houses 52 of 68 games on schedule.

The busiest day of the week is Saturday with 14 home games and 12 away games. Excluding the Christmas break, the Americans will play every Saturday including five straight Saturdays at home between October 5th and November 2nd.

Fridays are slated as our second busiest day this season. We will play 12 Friday games at home and 9 on the road.

Starting with opening night, the Americans will play at the Toyota Center for five straight Saturdays. The longest homestand of the season is six games stretched over a fifteen day period between October 19th and November 2nd.

The Americans will make their biennial trip to visit our Central Division opponents this season. That portion of the schedule is broken up into two separate road trips. In November, the Americans will play in Calgary (11/8), Lethbridge (11/9), and Edmonton (11/11). In February, the team will travel to Swift Current (2/19) for the second year in a row as the Broncos move from the East to the Central Division for the 2019-20 season. Tri-City will finish the road trip with games in Medicine Hat (2/21) and Red Deer (2/22).

The East Division will make their biennial road trip to play the U.S. Division this year. Four of the five East Division teams will play in Kennewick before the Christmas break. Brandon will visit first on October 22nd. The Americans will follow with a match-up against the the reigning WHL Champion Prince Albert Raiders on October 25th. The ICE will visit the Toyota Center for the first time since relocating to Winnipeg on November 22nd. Tri-City will then faceoff against the East Division’s Saskatoon Blades on November 27th, the day before Thanksgiving. Regina will wrap up this portion of the schedule on January 11th.

Celebrate your Thanksgiving week with the Americans. We will host three games at the Toyota Center between November 27th and November 30th, the day before Thanksgiving as well as the Friday and Saturday after.

Once again all Tuesday, Wednesday, Friday, and Saturday home games will start at the Toyota Center at 7:05 PM. This season’s schedule features three home games on Sunday, all which will start at 4:05 PM.

Season tickets are now on sale. Individual game tickets will be available purchase on September, 1st at 10:00 AM from the Toyota Center Box Office and online from Ticketmaster. For ticketing inquires contact the Americans office at 509-736-0606.