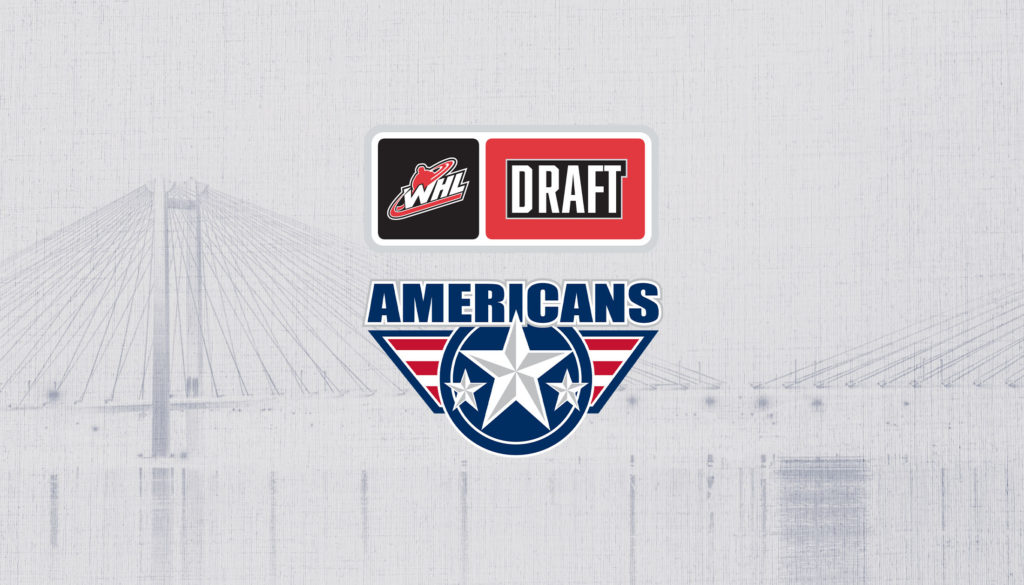 The Western Hockey League will conduct the 2020 WHL Bantam Draft online beginning at 9 a.m. PT on Wednesday, April 22, 2020. Real-time results will be available at WHL.ca/draft.

The Americans hold the fourth-overall pick in the draft following the conclusion of the WHL Bantam Draft Lottery on March 25. Tri-City will have the opportunity to make 14 selections in the draft including three picks in the top-50.

Last year Tri-City made 10 selections in the 2019 WHL Bantam Draft.

ROUND ONE: The Americans have selected fourth overall in the WHL Bantam Draft once prior in 1997. The pick was used to select forward Eric Johansson from Edmonton, AB. Through four seasons and 262 games played, Johansson totaled 266 points (112G, 154A) for the Americans.

Johansson’s best season with the Americans 2001-01 when he finished with 103 points. He was the last Tri-City player to score more than 100 points until Brendan Shinnimin (134 points), Adam Hughesman (116 points), and Patrick Holland (109 points) reached the milestone during the 2011-12 season.

After graduating the WHL, Johansson went on to play three seasons with the American Hockey League’s Albany River Rats and then 13 years of professional hockey in Europe.

ROUND TWO: Forward Adam Hughesman was selected by the Americans in the second round at 28th overall at the 2006 WHL Bantam Draft. Through 338 regular season games he collected 350 points (140G, 210A). The forward added 53 points (19G, 34A) in 71 post-season games with Tri-City. While with the Americans, Hughesman established himself as an exemplary player not only for his on-ice accomplishments but his passion and commitment to the Tri-City community as well.

After three years in the ECHL, Hughesman’s professional career took him to Europe where he currently plays for the Manchester Storm.

ROUND THREE: At the 2013 WHL Bantam Draft the Americans selected defenseman Dylan Coghlan at 63rd overall. The defenseman played for four seasons and 265 games with the Americans. During that time, he contributed 145 points (38G, 107A).

The blue liner from Nanaimo, BC was passed over in the 2016 NHL Draft, but signed a three-year entry-level contract with the Golden Vegas Knights later that summer. He now plays with the Knight’s AHL affiliate Chicago Wolves. In 126 AHL games played, Coghlan has put up 64 points (26G, 38A).

ROUND FIVE: The Tri-City Americans selected forward Morgan Geekie at 90th overall in the 2013 WHL Bantam Draft. The selection paid off quickly as the Strathclair, MB native scored as a 15-year-old in his WHL debut with the Americans.

Geekie played his first full WHL season in 2014-15 as a 17-year-old and totaled 25 points (12G, 13A) in 66 games for the Americans. The following season Geekie’s point production over tripled when he led the Americans with 90 points (35G, 55A). Undrafted the year prior, Geekie was selected 67th overall in the 2017 NHL Draft by the Carolina Hurricanes.

Geekie went on to average nearly a point-per-game through is career with the Americans totaling 202 points (78G, 124A) in 216 games. As good as Geekie was for Tri-City during the regular season, he performed even better during the playoffs. He contributed 17 goals and 10 assists in 19 games during Tri-City’s 2018 playoff run.

The high scoring forward has gone on to play the past two seasons with the AHL’s Charlotte Checkers. Through 128 games played he has recorded 88 points (41G, 47A). His post-season success continued into his professional career as added 18 points (8G, 10A) in 19 games

Prior to the suspension of the NHL season, Geekie made noise in the hockey world when he recorded three goals and four total points in his first two NHL games with the Carolina Hurricanes.

ROUND SIX: Patrick Holland was selected in the sixth round of the 2007 WHL Bantam Draft at 125th overall. Through 205 regular season games played with the Americans he tallied 208 points (63G, 145A).

The Lethbridge, AB born forward made a name for himself in Americans history during the 2011-12 season by contributing 27 goals and a league-leading 84 assists. The impressive campaign earned him WHL All-Star Second Team honors.

The Calgary Flames selected Holland in the seventh round (197th overall) in the 2010 NHL Entry Draft. His pro-career consisted of three seasons in the AHL and five games with the NHL’s Montreal Canadiens.

ROUND EIGHT: The Americans scouting staff found a steal in Jordan Topping at 175th overall in the 2012 WHL Bantam Draft. Topping, a forward from Salt Lake Springs, BC, put up 218 points (109G, 109A) for Tri-City through 243 games played.

The successful overage season earned Topping a contract with the ECHL’s Toledo Walleye. Since graduating from the WHL, he has played two seasons in the ECHL with the Toledo Walleye and most recently the Allen Americans. In 114 career games he has recorded 76 points (43G, 33A).

ROUND NINE: In 2007 the Americans selected Justin Feser in the ninth round at 194th overall. Feser went on to play 353 games with Tri-City tying him for seventh most games played in WHL history. He holds the league record for most consecutive games played with 321 games. The forward totaled 353 regular season points (155G, 198A) for the Americans. In his 20-year-old season, Feser served as the team’s captain. Since leaving Kennewick he has played seven seasons of professional hockey in Europe.

ROUND TEN: The Americans found a gem in the tenth round of the 2011 WHL Bantam Draft with Brandon Carlo at 214th overall. Carlo suited up for 186 games with Tri-City and collected 65 points (11G, 54A) and 250 penalty minutes.

The Colorado Springs, CO native competed with Team USA at the World Juniors Championship in 2015 and again in 2016 when his team won bronze.

Carlo was selected by the Boston Bruins in the second round (37th overall) of the 2015 NHL Draft. He made his NHL debut in 2016 and has played 297 games with the Bruins over four seasons. Carlo has recorded 51 points (12 goals and 39 assists) in the NHL.