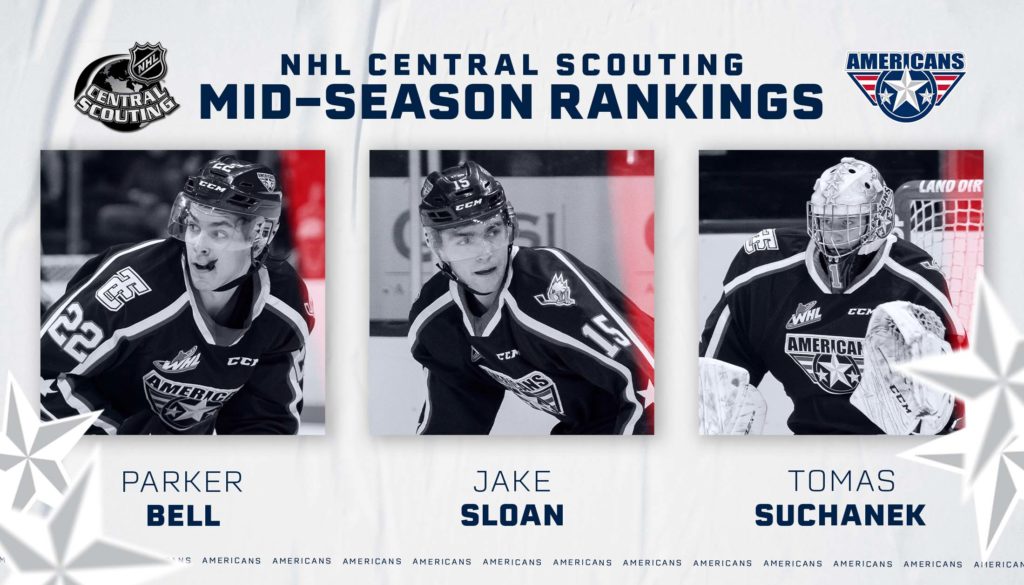 The rankings are Central Scouting’s compilation of top prospects from all the major development leagues throughout North America and Europe. The list is updated throughout the season while scouts continue to evaluate the players.

Bell, a native of Campbell River, B.C., was selected by Tri-City in the fifth round of the 2018 WHL Prospects Draft. The six-foot-four and 192-pound forward leads the Americans in scoring with 11 goals and 11 assists through 28 games played this season. Before this season he had scored just once and totaled six assists over 61 games between the 2019-20 and 2020-21 seasons.

As a late 2003-born player, Bell is eligible to be selected for the first time in the 2022 NHL Draft.

Hailing from Leduc, Alta., Jake Sloan was selected by Tri-City in the third round of the 2020 WHL Prospects Draft. The 2004-born forward stands at six-foot-three and 207-pounds. He has played 49 career games with the Americans, scoring 14 goals and adding 17 assists.

Sloan appears on Central Scouting’s Mid-Term Rankings after being left off their watch lists earlier in the season. Since the beginning of December, Sloan has improved to a point-per-game average with five goals and seven assists over 12 games.

Netminder Tomas Suchanek, a native of the Czech Republic, was selected by Tri-City ninth overall in the 2020 CHL Import Draft. He reappears on Central Scouting’s list after having suffered an injury early in the season. Suchanek, six-foot and 172-pounds, has played ten games with the Americans, averaging 3.99 goals against and a .897 save percentage.

The 2022 NHL Draft is set to take place July 7 and 8 at the Bell Centre in Montreal.