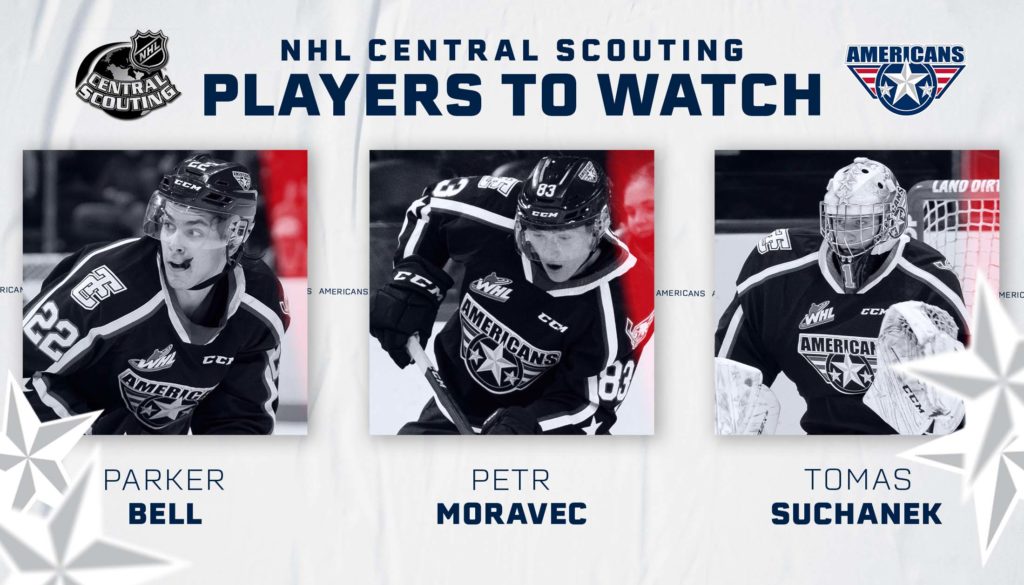 Bell, Moravec, and Suchanek were all three rated as ‘C’ prospects indicating a potential fourth-, fifth- or sixth-round selection in the 2022 NHL Draft.

The Players To Watch List is Central Scouting’s compilation of top prospects from all the major development leagues throughout North America and Europe. The list is updated throughout the season while scouts continue to evaluate the players.

Bell, a native of Campbell River, B.C., was selected by Tri-City in the fifth round of the 2018 WHL Prospects Draft. The six-foot-four and 192-pound forward is off to a strong start in the 2021-22 season with three goals and two assists in five games. For his career, Bell has played 66 games for the Americans scoring four goals and adding eight assists.

As a late 2003-born player, Bell is eligible to be selected for the first time in the 2022 NHL Draft. Moravec and Suchanek are both in their second year of draft eligibility.

Hailing from the Czech Republic, Moravec was selected by Tri-City 57th overall in the 2021 CHL Import Draft. In his first season with the Americans, the six-foot and 181-pound center has already collected two goals and two assists through four games.

Netminder Tomas Suchanek, also a native of the Czech Republic, was selected by Tri-City ninth overall in the 2020 CHL Import Draft. He has played one game in net for the Americans stopping 42 of 45 shots in a 5-3 victory over the Spokane Chiefs. Last season he played in the Czech2 league with HC Frydek-Mistek, through 21 games Suchanek averaged 3.12 goals against and a .908 save percentage.

Americans Battle Back to Earn Point, Fall Short in Overtime
14 hours ago
3:21
Video Highlights: 12/1 vs. Victoria
14 hours ago