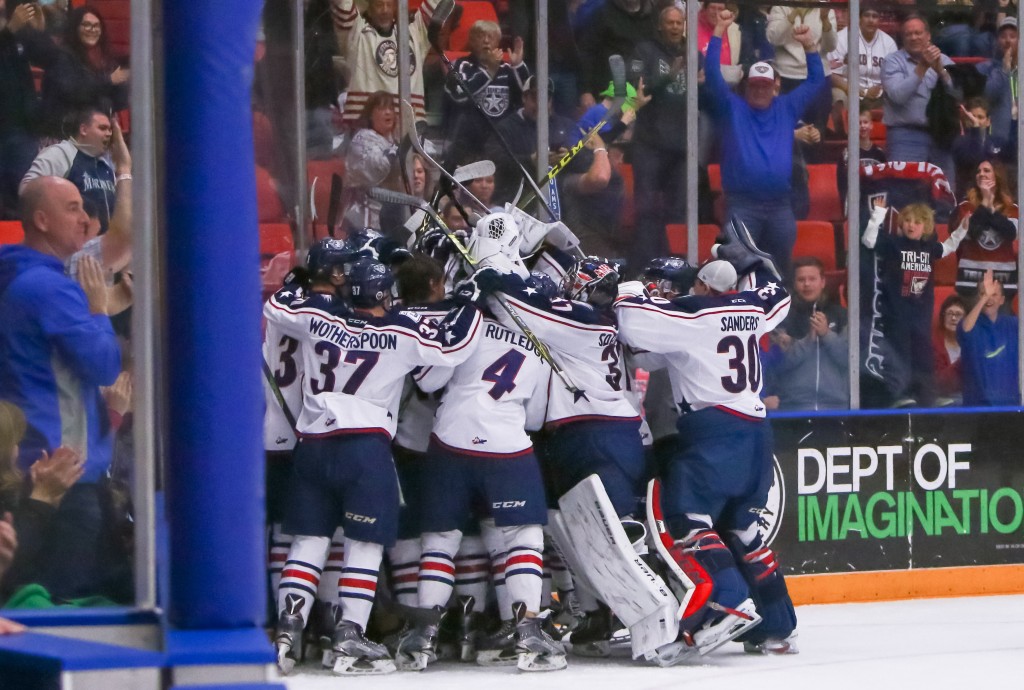 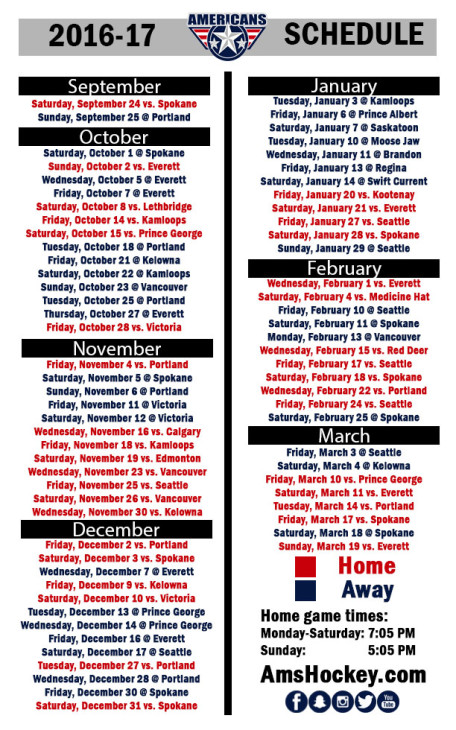 KENNEWICK, WA – Today the Tri-City Americans, in conjunction with the Western Hockey League, announce their regular season schedule for the upcoming 2016-17 season.

The Tri-City Americans open their 29th season in the Mid-Columbia hosting their arch rival, the Spokane Chiefs, on Saturday, September 24th. Game time is 7:05 pm at Toyota Center. The next day, the Americans make the trip to Portland to take on the Winterhawks (Sunday, Sep. 25).

The October schedule is highlighted by the Americans second longest road trip of the season that includes six games. The team also faces the Central Division Champions, the Lethbridge Hurricanes (Saturday, Oct. 8) on home ice at the Toyota Center.

The Americans will host a bevy of opponents at home as they begin their longest homestand of the year, totaling 10 games between November and December. Tri-City’s two Eastern conference foes during this homestand are the Calgary Hitmen (Wednesday Nov. 16) and the Edmonton Oil Kings (Saturday Nov. 19).

The 28th annual New Year’s Eve game finishes off 2016 by pitting the Americans against the Spokane Chiefs. Tri-City rings in the New Year with a season-high seven-game road trip. The trip has the Americans facing five straight Eastern Conference foes including the WHL Champion Brandon Wheat Kings. Looking towards the end of the calendar, Tri-City faces arch rival Spokane Chiefs for a final time in the regular season on St. Patrick’s Day (Friday, Mar. 17).

Of the 28 weekend home games, Tri-City will play 13 on Friday, 13 on Saturday and 2 on Sunday. Tri-City’s schedule is also balanced this season, with 18 home games before the seven-day Winter Break and 18 after.

Single seats for the home opener will go on sale August 8th at noon at the Toyota Center Box office and online at ticketmaster.com.  The entire 2016-17 regular season will go on sale September 1st at 10am at the above locations.

Season memberships and weekend packs (all Friday and Saturday games) are now on sale for the upcoming 2016-17 WHL season.   Call (509) 736-0606, visit AmsHockey.com or drop by the Americans office at the bottom level of the Toyota Center for more information.