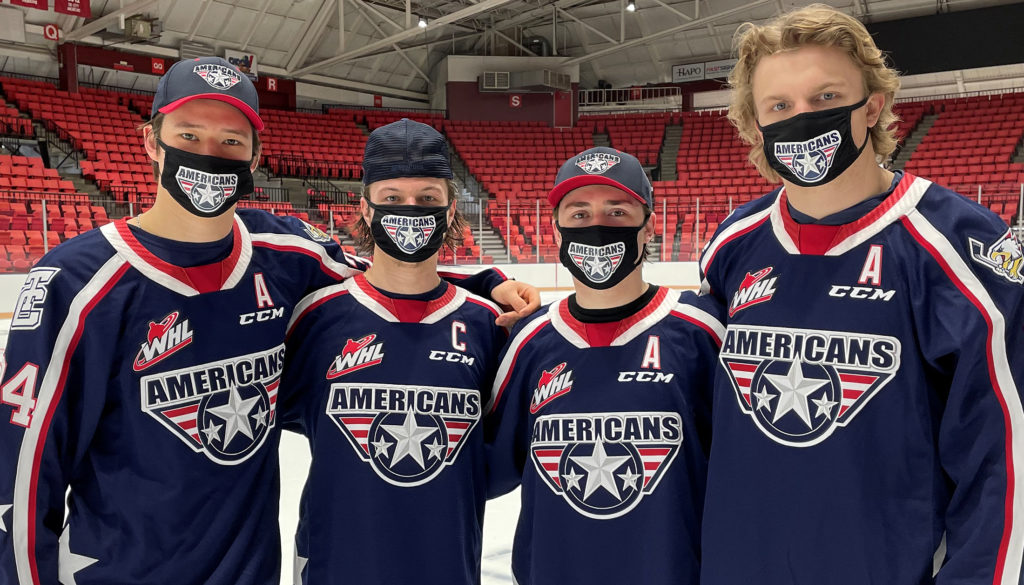 Zazula was originally selected by the Kamloops Blazers in the fourth round (82nd overall) of the 2015 WHL Bantam Draft. The Americans acquired the five-foot-eight and 165-pound defenseman in a trade with Kamloops on November 27th, 2019. Zazula’s tenure with the Americans has been short but impactful. In just 37 games with the Americans last season, he led the team’s defensemen in scoring with five goals and 16 assists and was named Defensive Player of the Year.

Zazula, a Langley, BC native, will become the 32nd captain in franchise history.

Selected 161st in the 2016 WHL Bantam Draft, Bouchard is entering his fourth season in the WHL. The five-foot-seven and 160 pound forward has collected 19 goals and 64 assists with 83 penalty minutes through 182 games played.

Brown returns to the Americans for his fourth year in the WHL after missing the second half of last season due to a shoulder injury. Selected in the second-round (29th overall) of the 2016 WHL Bantam Draft, the six-foot-three and 210-pound defenseman has put up six goals and 23 assists in 137 games played with the Americans.

Mutala was selected by Tri-City in the first-round (6th overall) of the 2016 WHL Bantam Draft. Through three full season and 198 games with the club, the six-foot and 190-pound forward has recorded 59 goals and 75 assists with 116 penalty minutes. In 2019 Mutala became the 64th Tri-City Americans player selected in the NHL Entry Draft when he was taken 140th overall by the Colorado Avalanche.

The Americans will open the 2020-21 season this Thursday at the Toyota Center as they take on the Portland Winterhawks. Fans can catch all 24 games live via our webcast at watch.chl.ca.