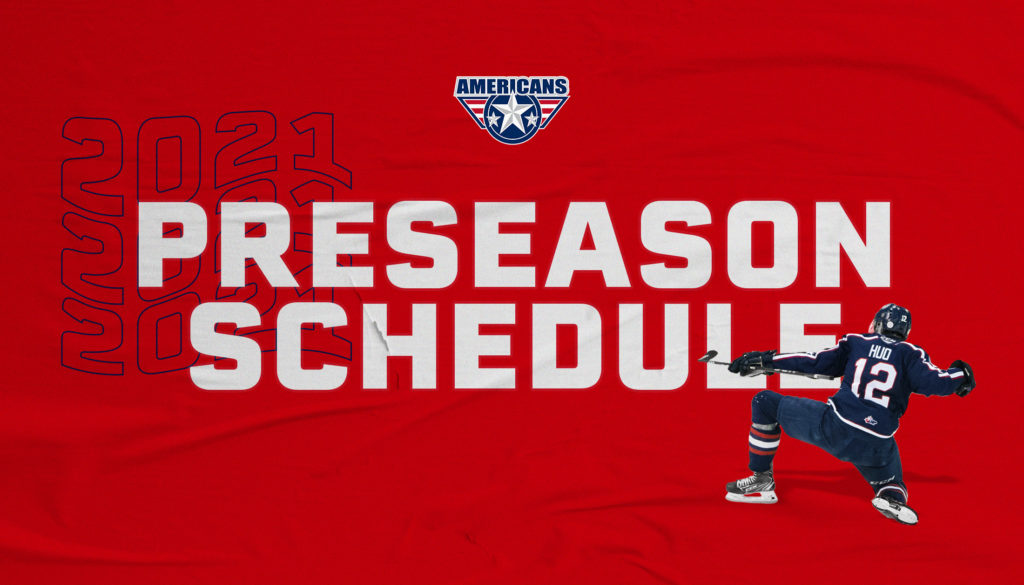 Kennewick, WA – Tri-City Americans General Manager Bob Tory, along with the Western Hockey League (WHL), announced the Americans 2021 preseason schedule today.  The exhibition season features two tournaments, in addition to an individual game against the Spokane Chiefs. Prior to the commencement of the regular season the Americans will play a total of seven contests against all four U.S. Division opponents.

Tri-City kicks off their preseason in Everett for a three-day tournament, scheduled for September 10 – September 12, at Angels of the Winds Arena. It will be the franchise’s thirteenth consecutive trip to the Silvertips’ tournament. While there, the Americans will match up against U.S. Division rivals, Everett Silvertips and Seattle Thunderbirds before returning to Kennewick.

The 2021 Red Lion Preseason Tournament hosted by the Tri-City Americans will take place September 17 – 19 at the Toyota Arena.  In addition to the Americans, this year’s tournament will feature the four other U.S. Division teams; Everett Silvertips, Seattle Thunderbirds, Spokane Chiefs, and Portland Winterhawks. The tournament schedule includes two games on each Friday, Saturday, and one game on Sunday. The Americans will play the evening game on Friday and Saturday and the solo game on Sunday.

All training camp and preseason events until September 24 will take place in the Toyota Arena, located next door to the Toyota Center. For more information on this CLICK HERE.

Tickets for the Red Lion Tournament will go on sale Monday, August 23 online through Ticketmaster. After Labor Day, they will be available at the Toyota Center Box Office or upon entrance at the tournament. A one-day ticket will cost $12 and is valid for both games that day. There will be a limit of 400 tickets per day. Tickets are not included in Season Ticket packages due to the limited number of seats.

Tri-City concludes their preseason with a home-and-home series against the Spokane Chiefs. The U.S. Division rivals will play Friday, September 24 in Spokane at then Saturday, September 25 at the Toyota Center.

Single game tickets for the 2021-22 season will go on sale in September. Season tickets are available now. CLICK HERE for more information on Ams Season Tickets.