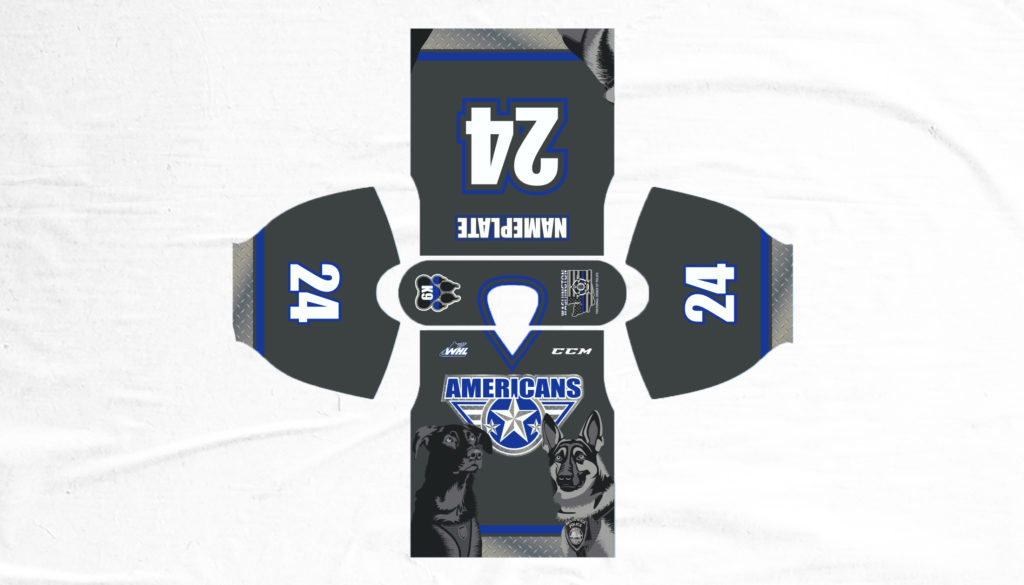 The Americans are auctioning off special Police K9 themed jerseys with part of the proceeds benefiting the Kennewick Police Department K9 Unit. The jerseys were intended to be worn during the final game of the 2019-2020 season before the game was cancelled due to the pandemic.

Bear, part German Shorthaired Pointer and part German Shepherd, recently retired after over seven years of service with the KPD. As part of the K9 Unit, Bear was a valuable tool used nearly 800 times to help officers and investigators locate over 189 drug paraphernalia items, 54 pounds of cocaine, 43 pounds of heroin and over 340 pounds of methamphetamine. Nine-year-old Bear continues to live with his handler, Officer Merkl, who is a billet for the Americans.

Ivan is a three-year-old German Shepard/Belgian Malinois mix and specializes in helping the KPD apprehend suspects involved in serious crimes who pose a danger to officers and the public. His primary job is to provide a safer environment for officers and to help officers hold criminals accountable. Since his start in 2019, Ivan has been used 168 times to locate dangerous criminals. He has already supported officers, including his handler Officer Whitney, safely apprehend 43 suspects. Ivan is originally from the Czech Republic and even has his own passport.

Everyone who purchases a jersey will have the opportunity to meet K9 Bear at a jersey pick-up on Sunday, May 16 between noon and 1:00 p.m. at the Toyota Center. Auction winners will be contacted with further details.

Support the Tri-City Americans and Kennewick Police Department K9 Unit by purchasing one of these jerseys. Bidding starts at $250 with a Buy It Now price of $600. The auction ends at 10:00 p.m. on Monday, May 10.

The Americans still plan on hosting a Police K9 night in the future. This special jersey design will be remade and wore when we can once again welcome a full crowd to the Toyota Center.

BID ON THE JERSEY AUCTION HERE.