Americans Battle Back to Earn Point, Fall Short in Overtime 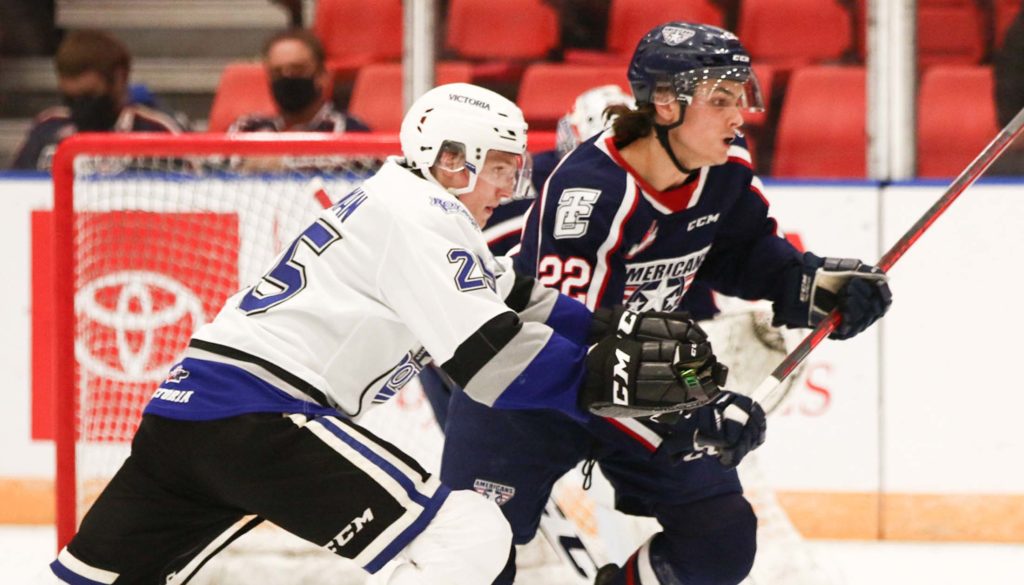 After falling behind early to the Victoria Royals tonight, the Americans made a third period comeback to push the game into overtime and secure a point.

The Royals jumped out to a 3-0 lead with a trio of goals in the first period. They held onto their lead through the second intermission.

Parker Bell broke through with a goal for the Americans 1:18 into the final frame. The 2022 NHL Draft prospect scored backdoor off a net-front feed from Rhett Melnyk. Carson Haynes also received an assist on the goal.

Down 3-1 with two minutes remaining, netminder Tomas Suchanek was pulled for an extra attacker. The Americans were able to capitalize on the opportunity with a goal from Sasha Mutala scored off a backdoor feed from Connor Bouchard. Haynes also assisted the goal for his second point of the night.

With just one second remaining, Jake Sloan won a faceoff feeding the puck to Parker Bell who scored with a shot from the right circle to send the game into overtime.

The Americans put out a valiant in the extra frame but with 1:00 remaining, the Royals stole the win with a breakaway goal from Tarun Fizer.

Tonight was the first time the Americans and Royals have met since January 2020 in Victoria. They will play each other twice more this season in two weeks when the Americans travel to British Columbia.

Marc Lajoie played his 100th career game tonight. The 18-year-old native of St. Albert, Alta. was selected 14th overall by the Americans in the 2018 WHL Prospects Draft. Through 100 career games, he has scored 13 goals and added 15 assists.

Congrats on the milestone, Marc! 💯 pic.twitter.com/H9CcuitMI2

The Ams return to the Toyota Center this Saturday to take on the Prince George Cougars on Fred Meyer Teddy Bear Toss night. For more information, click here.