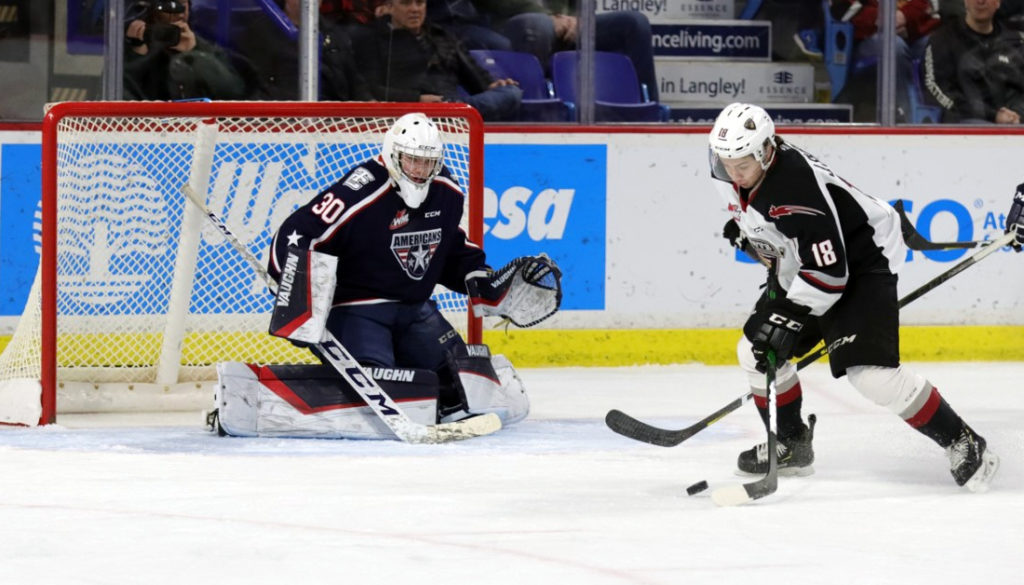 LANGLEY, BC – The Americans wrapped up a four game road trip against the Vancouver Giants today. After scoring the first goal, Tri-City ultimately fell 12-4 to finish their road trip with a 1-3-0-0 record.

Colorado Avalanche prospect Sasha Mutala opened scoring at the Langley Events Center 12 minutes into the first period. The goal from Tri-City’s leading scorer came off a wrist shot from the left circle directly after a faceoff win from Nick Bowman.

The Giants followed with six straight goals to take a 6-1 lead before Sam Huo responded for the Americans at 4:56 second period.

Rookie goaltender Mason Dunsford started again in net for the Americans as Talyn Boyko remains out with an upper-body injury. Dunsford stopped 10 shots before being relieved in net after Vancouver’s fourth goal by affiliate player Ronin Geraghty. Geraghty went on to stop 36 of 44 shots faced through the remainder of the game.

Down 8-2 halfway through the final frame overage forward Jadon Joseph scored, unassisted, on a breakaway. The goal marks his first since joining the Americans from Kelowna on January 9th.

Mutala went on to add his second goal of the game, scored on Tri-City’s only power play of the night. The Americans went 1/1 and Giants 3/4 with a man advantage.

The Americans return to the Toyota Center on February 7th for a rivalry matchup against the Everett Silvertips. Get your tickets here.