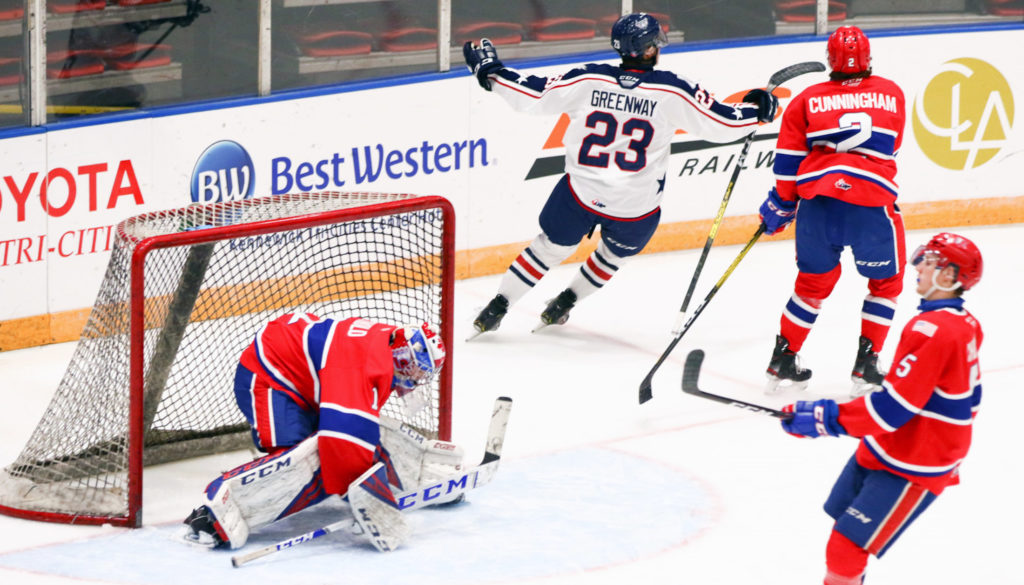 Kennewick, WA – Luke Zazula netted his first goal of the season just 18 seconds into overtime to secure a 3-2 victory for the Americans over the Chiefs tonight at the Toyota Center.

Sam Huo opened scoring tonight in the second period off a shorthanded odd-man rush, assisted by Booker Daniel. Huo leads the Americans in scoring with five goals and three assists.

Just over two minutes later the Chiefs responded on the power play with a goal from Blake Swetlikoff, the first of his WHL career.

Later in the period, Tyson Greenway would capitalize on a breakaway opportunity and put the Americans back in front. The goal was assisted by Jake Sloan and Bryson Andregg, marking Andregg’s first WHL point.

Tyson Greenway puts us back in front with his first goal of the season!

The Americans held on to their one goal lead into the second intermission. 59-seconds into the third period Cordel Larson scored to once again tie the game for Spokane.

Talyn Boyko made his second start in as many nights for the Americans. He stopped 20 of 22 shots faced tonight from the Chiefs.

The game held tied at two and extended into overtime where Luke Zazula quickly sealed a win for the Americans. Zazula’s game winning goal, his first of the season, came 18 seconds into the extra frame assists by Sam Huo and Booker Daniel.

Assisted by Huo and Daniel. pic.twitter.com/C5Yv3mItmg

On Tuesday the Americans are back in action at the Toyota Center as they take on the Seattle Thunderbirds for the first time this season.