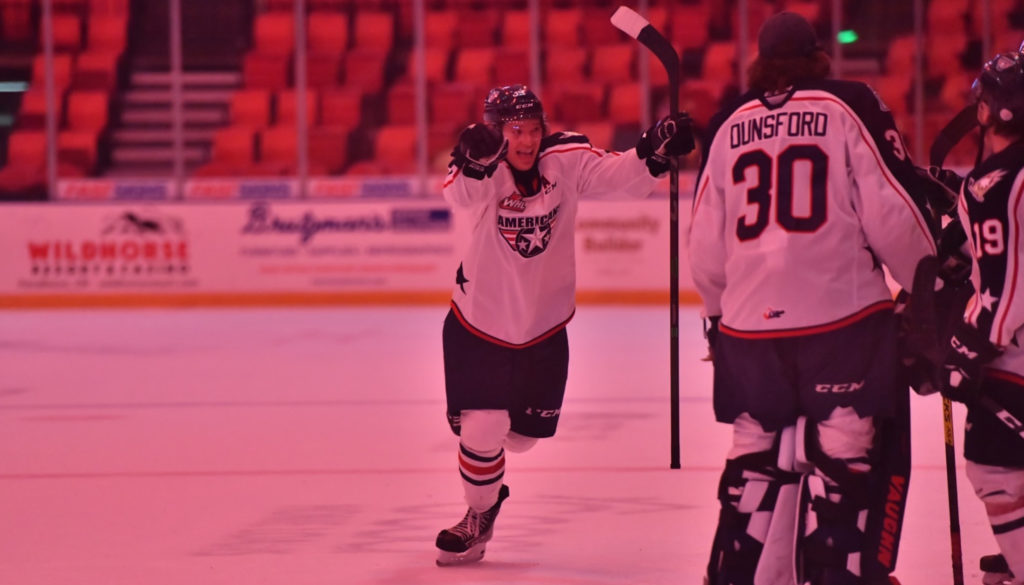 KENNEWICK, WA – The Americans and Thunderbirds matched up for the first time this season today at the Toyota Center. Tri-City took a dominate 5-2 victory to earn their first set of back-to-back wins this season.

The Thunderbirds opened scoring tonight just 1:45 into play with a goal from Jordan Gustafson.

Just 33 seconds later the Ian Ferguson replied for the Americans to tie the game. The goal came off a long shot from center ice and is Ferguson’s first in the Western Hockey League.

Ian Ferguson ties the game with his first ever WHL goal! pic.twitter.com/tcow0S7C4h

The rapid scoring continued with a goal from Sam Huo less than 20 seconds later. Huo’s goal was assisted by Sasha Mutala and Luke Zazula. Through nine games played Huo leads the Americans in scoring with six goals and two assists.

The Americans were outshot 12-4 through the first period but held on to a 2-1 lead into intermission.

Thirty-one seconds into the second frame Connor Bouchard slipped the puck past Thunderbirds netminder Jackson Berry extending the Americans lead to 3-1. The unassisted goal was Bouchard’s second of the season.

Talyn Boyko played the full game in net for the Americans. He stopped 28 of 30 shots faced.

Rookie forward Jake Sloan set up Booker Daniel on an odd-man rush for Tri-City’s fourth goal of the night.

Keltie Jeri-Leon added one final goal for the Thunderbirds 2:01 into the last frame. The Americans held the Thunderbirds off for the rest of the game and added an empty net goal from Mitchell Brown to seal a 5-2 win.