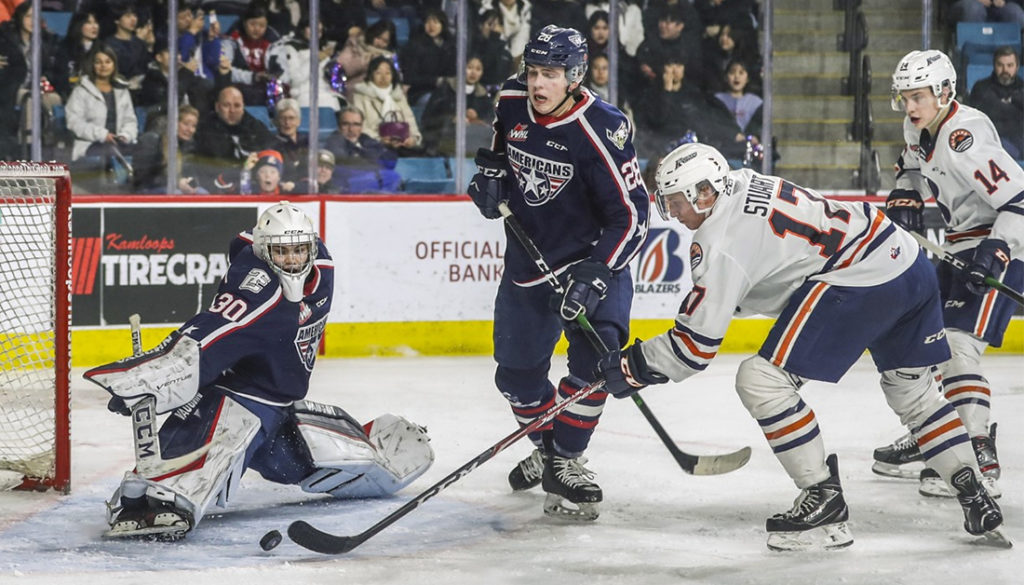 KAMLOOPS, BC – The Americans and Blazers matched up today for the first time this season in a high-scoring affair at the Sandman Centre.

Krystof Hrabik buried a rebound from the slot just 35 seconds into the game to open scoring. The goal extends Hrabik’s point streak to nine games. He has collected five goals and seven assist over that period.

Tri-City didn’t hold a lead for long as Caedan Bankier replied a minute later to tie the game for Blazers.

The flurry of scoring started when Zane Franklin and Brodi Stuart scored 37 seconds apart to give Kamloops a 3-1 lead over Tri-City. They added two more by the end of the first period to take a 5-1 lead into intermission.

Rookie goaltender Mason Dunsford had his first ever WHL start tonight in Kamloops. He was relieved by Talyn Boyko after Kamloops’ fourth goal, but later returned for the third period to complete the game. The 16-year-old stopped 16 of 25 shots faced from the Blazers.

Scoring didn’t slow through the remainder of the game.

Max Martin netted the Blazers’ sixth of the night 4:54 into the second period. He would later add another in the third period as the only player to record multiple of the 15 total goals from tonight’s game.

Down 6-1, the Americans came alive mid-second period with a pair of goals. Paycen Bjorklund snipped a wrist shot past Kamloops’ rookie goaltender Rayce Ramsey on an odd-man rush down the right side. The goal came 9:38 into the second period. Just 33 seconds later Josh Pillar added the Blazers’ seventh of the night. Tri-City’s Sam Huo responded immediately for the Americans. The three goals were scored within 41 seconds.

Kamloops added four more goals through the game to take a final 12-3 victory over the Americans.

The two teams will match up again tomorrow at the Sandman Centre.