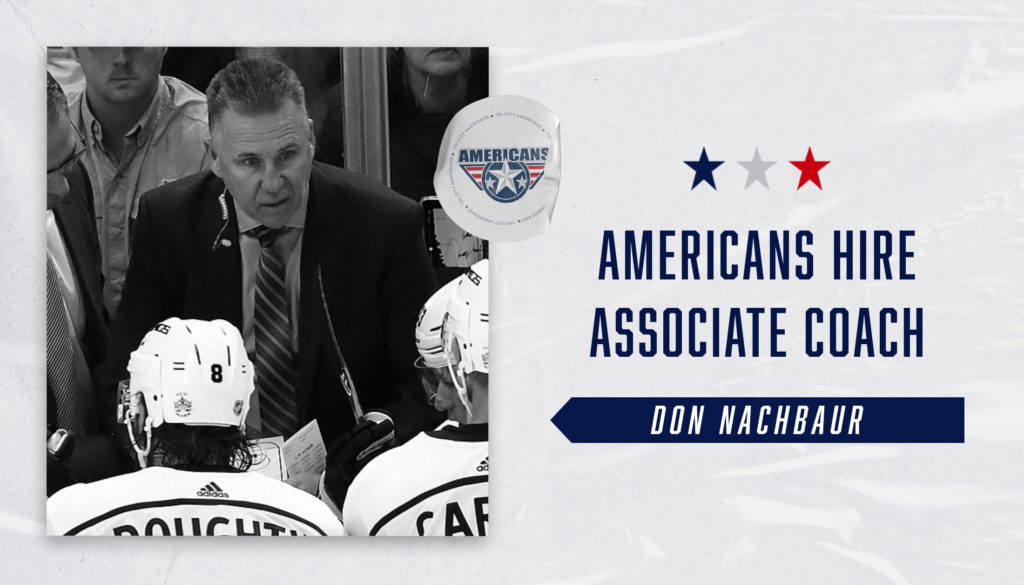 KENNEWICK, WA – Tri-City Americans general manager Bob Tory announced today that the organization has hired Don Nachbaur as the team’s new associate coach. He will join head coach Kelly Buchberger who is in his third season with the Americans. Per club policy, the terms and conditions of the contract are not disclosed.

Nachbaur returns to Tri-City after spending six seasons with the Americans as head coach between 2003 and 2009. During his previous time in Tri-City, Nachbaur led the Americans to the Scotty Munro Trophy as the WHL’s regular season champions in 2008 and guided the team to two division championships in 2008 and 2009.

He also spent six years with the Seattle Thunderbirds and seven with the Spokane Chiefs. Nachbaur is third in all-time wins for a WHL coach with 692 and has won the WHL’s Dunc McCallum Memorial Trophy as Coach of the Year three times: 1994-95 with Seattle, 2007-08 with Tri-City, and 2010-11 with Spokane.

“I am extremely excited to bring Don back to our organization,” said Tory. “I have worked with him twice and both times he won WHL Coach of the Year. He brings a wealth of experience both as a player and a coach.”

“I want to thank Bob, Kelly, and the Americans ownership group for the opportunity to once again be part of the organization,” said Nachbaur. “I am very excited to meet the players and assist in their development while working alongside Kelly.”

Before his lengthy coaching career, Nachbaur spent 15 years in the professional ranks as a player. Originally selected by the Hartford Whalers in the in the third-round of the 1979 NHL Draft, Nachbaur spent parts of eight seasons in the NHL. He played 223 games in the NHL with Hartford, Edmonton, and Philadelphia, scoring 23 goals and 46 assists with 465 penalty minutes.

Nachbaur also played 469 games in the AHL where he totaled 174 goals and 187 assists and won a Calder Cup Championship with the Hershey Bears in 1988. He then played four seasons of professional hockey in Austria before moving on to his coaching career in 1994.