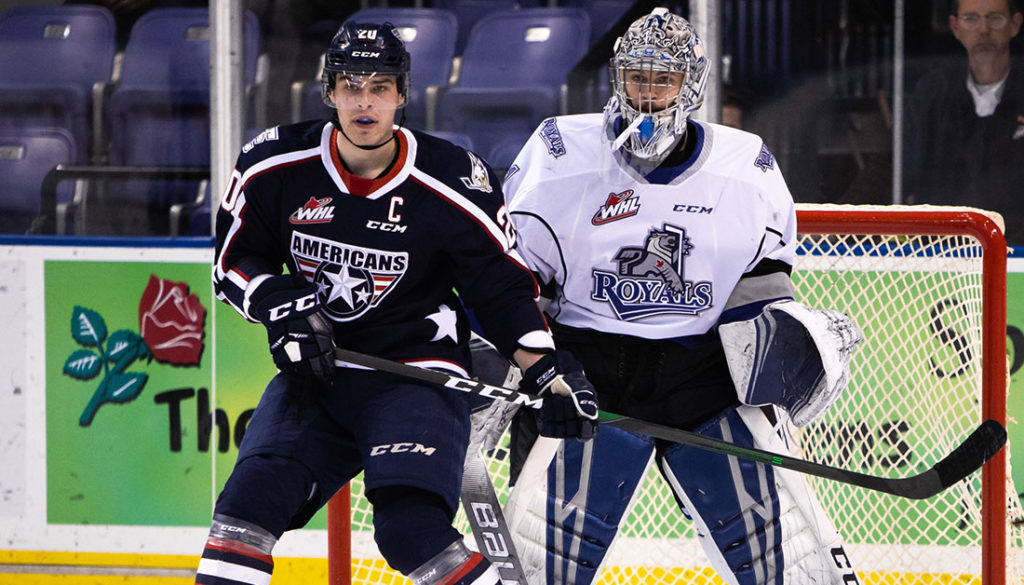 VICTORIA, BC – The Americans and Royals matched up for the first of back-to-back games at the Save-On-Foods Memorial Centre today. Victoria emerged victorious by a score of 3-1.

Offense started slow tonight with the game remaining scoreless into the second period.

Brayden Tracey, who was acquired by Victoria last week at the trade deadline from Moose Jaw, opened scoring 3:36 into the second period for the Royals. Matthew Smith followed with tonight’s game winning goal off a shot from the blue line.

The Royals took a 2-0 lead into the third period.

There were a total of five penalties through the game tonight. Tri-City finished the game 0/3 on the power play and the Royal 0/2.

Brandon Cutler extended Victoria’s lead to 3-0 with a shot through traffic from the slot. Americans netminder Talyn Boyko played his 13th game of the season tonight and stopped 26/29 shots faced.

Down by three, the Americans continued to play hard through the final minutes. The team’s captain, Krystof Hrabik, was able to put the Americans on the board in the final seconds of the game after Boyko was pulled for an extra attacker.

Krystof Hrabik puts the Americans on the board with 15.4 seconds left. pic.twitter.com/vTqe12CLlE

The two teams will play again tomorrow. The Americans have split wins with the Royals for each of their past five back-to-back meetings in Victoria.

The Americans will be on the road for the next two weeks. They return to the Toyota Center on Saturday, January 25th to take on the Spokane Chiefs. Get your tickets for the popular rivalry game here.