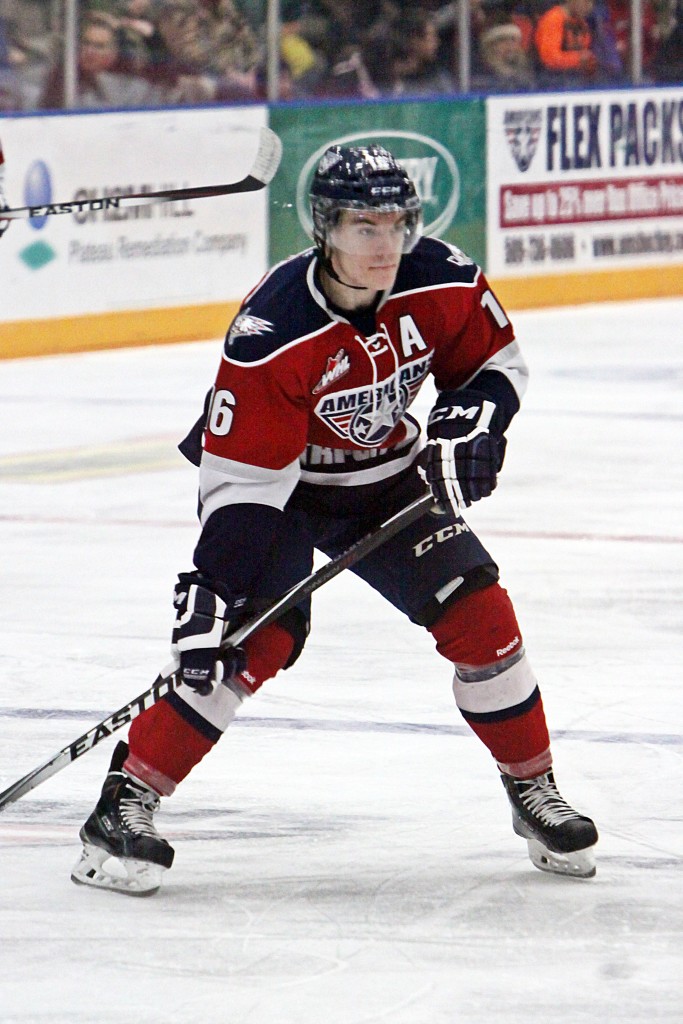 McCue, a Pasco, WA resident, becomes the 27th team captain in team history. About to begin his fourth season with the Americans, McCue has played in 198 career WHL games, recording 63 goals and 120 points. He was an assistant captain during the 2014-15 season and scored 26 goals and tied for the team-high 51 points.

“Beau was the obvious choice to management, coaches and players,” Tory said. “He has been in our program for four years and understands our culture, environment and expectations. He will be joined by a strong supporting group of quality players and citizens with Carlo, Vickerman, Wotherspoon and Bowles.”

Carlo, hailing from Colorado Springs, CO, is entering his third season with the Americans. The 6’5” defenseman played in 63 games last season, recording four goals and 25 points. The 18-year-old was drafted by the Boston Bruins in the second round (37th overall) of the 2015 NHL Draft.

Wotherspoon, a native of Surrey, B.C., is also entering his third season in Tri-Cities. The 18-year-old defenseman played in all 72 games last season, scoring nine goals and 42 points. Wotherspoon was drafted by the New York Islanders in the fourth round (112th overall) of the 2015 NHL Draft.

Bowles, a Kelowna, B.C. product, is gearing up for his fourth season in an Americans sweater. The 20-year-old forward played in 47 games last season, recording 13 goals and 44 points. He has played in 159 games in his WHL career, scoring 49 goals and 128 points.

Vickerman, born and raised in Kennewick, WA, is preparing for his fourth WHL season. The 19-year-old forward completed his second season for the Americans last season, playing in 60 games while tallying six goals and 13 points. Vickerman earned the 2015 WHL’s Humanitarian of the Year award for his efforts in the community.

“We have had a history of excellent leadership and are confident that this continues with this group,” Tory said.

“We feel we have a strong group of leaders and know how important that is going to be to our success,” Head Coach Mike Williamson said. “We know we can count on these players to work hard every day, to lead by example and to hold their teammates accountable to high standards both on and off the ice.”

The regular season begins this Saturday, Sept. 26, as the Tri-City Americans face the Spokane Chiefs at Spokane Arena. Game time is at 7:05 p.m. Tri-City will begin its home schedule on Saturday, Oct. 3, against the Spokane Chiefs at the Toyota Center on Tri-Cities Rotary Opening Night. Tickets are available at all Ticketmaster locations, including the Toyota Center Box Office, at all Fred Meyer outlets or online at Ticketmaster.com.