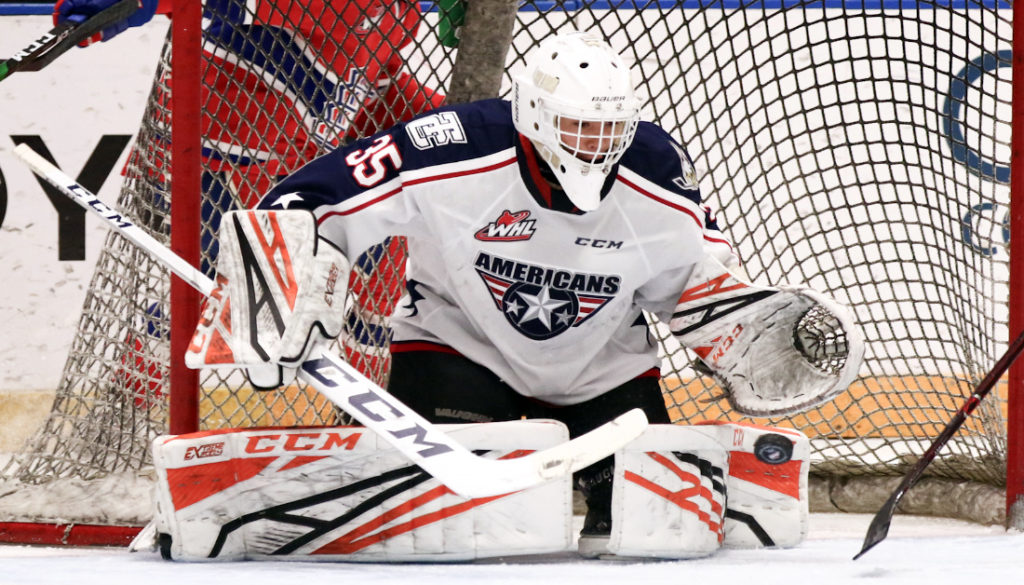 KENNEWICK, WA — The Americans returned home tonight after a five game road stretch to take on the Spokane Chiefs.

15-year-old goaltender Ronin Geraghty highlighted the game with his first ever WHL start. Geraghty, a native of Burnaby, BC, made highlight saves all night stopping 41 of 48 shots faced from the Chiefs. After the game the team signed Geraghty to a Western Hockey League Standard Player Agreement.

The game remained scoreless until 16:51 into the first period when Brad Ginnell scored a power play goal for Spokane. Jayden Platz replied for Tri-City with one second left in the period to tie the game. Platz’s goal, his third of the season, came unassisted off a hard shot from the blue line.

Spokane gained control of the game early second period when they scored of a pair of shorthanded goals (Leif Mattson, Luke Toporowski). Geraghty followed with a delay of game penalty putting the teams at four-on-four. Thirty seconds later Colorado Avalanche prospect Sasha Mutala scored for the Americans to put them within one.

After four-on-four play expired, Mattson scored his second goal of the night on the power play. The Chiefs followed with three more goals to take a final 7-2 victory.

The Chiefs were 3/3 on the power play, a season high power play goals against for the Americans.

The Americans are on the road for the next two weeks. Watch them take on the Everett Silvertips in their return to the Toyota Center on February 7th. Get your tickets here.