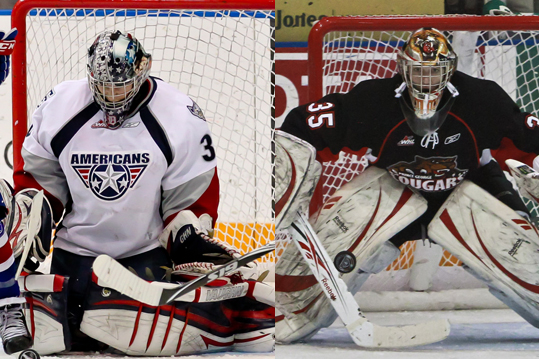 “Obviously we have an overage situation that needed attention,” stated Tory.  “This deal helps alleviate some of those issues while returning valuable draft picks and a veteran goaltender.  We feel that the tandem of Ty (Rimmer) and Eric (Comrie) gives us depth in goal headed into the 2011-12 season.  We welcome Ty to our family and look forward to watching him compete at camp.”

Owsley, listed at 5’8 170 pounds from Lethbridge, Alberta, was a former list prospect Tri-City added in September of 2007.   Over the next three seasons, Owsley went on to appear in 122 regular season games for Tri-City, registering a 76-33-2-2 record, a 2.68 goals against average, a 0.911 save percentage and nine shutouts.  He leaves Tri-City ranked 3rd all-time on the Americans’ regular season wins, goals against average and shutout lists, 2nd all-time save percentage and 6th all-time in games and minutes played.  Owsley also finishes his Tri-City career inked all over the Americans’ playoff record books.  Owsley departs as the all-time leader in playoff games played (29), minutes played (1,684), wins (18), save percentage (0.920) and shutouts (3) while his 2.49 playoff goals against average ranks 2nd all-time.

“Unfortunately, we cannot keep all of our overage players.  This will give Drew the opportunity to continue to play in the WHL in a dominant role with Prince George,” Tory continued.  “We thank Drew for all he has done for our program and wish him nothing but the best with the Cougars.”

The move leaves Tri-City with five overage players headed into training camp in just over three weeks.  The remaining 20-year-olds on the roster are Adam Hughesman, Brendan Shinnimin, Mason Wilgosh, Matt MacKenzie and Brock Sutherland.  The Americans will need to be down to three overage players no later than October 13, which is the mandated WHL Overage Cutdown Draft.

Tri-City Americans season ticket plans are now available for the 2011-12 season.  Season ticket plans can be purchased by using several, convenient monthly payment schedules after a one-time service charge.  Call 509.736.0606, visit AmsHockey.com or drop by the Americans offices’ at the bottom level of the Toyota Center for more information.