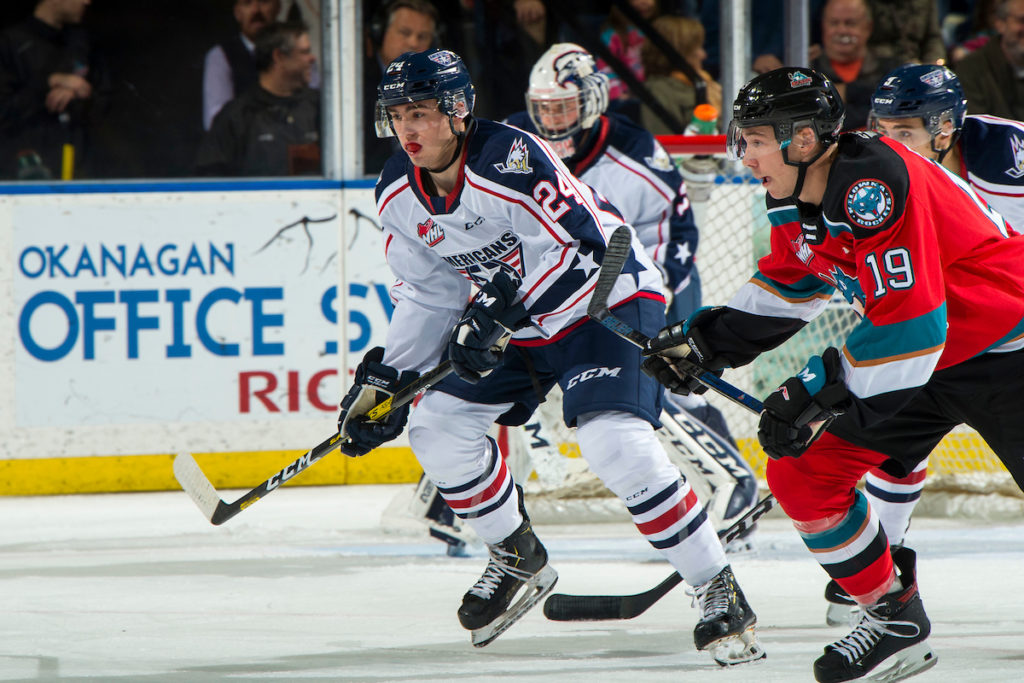 The Americans wrapped up their season opening road trip today in Kelowna with a 6-1 loss to the Rockets. Playing the first five games of the season away, the Ams will return home with a 3-2-0-0 record. The Home Opener at the Toyota Center is this upcoming Saturday. Details on the eventful evening can be found here.

Earlier today it was announced that Americans Captain Kyle Olson is returning from his amateur tryout with the Rochester Americans. General Manager Bob Tory later confirmed that he will be in the lineup for Saturday’s Home Opener against Spokane.

Kyle Olson is returning to Tri-City from an amateur tryout with the AHL's Rochester Americans.

Coming off a shutout last Saturday in Spokane, Beck Warm played all 60 minutes in net for the Americans tonight. He stopped 36 of 42 shots faced from the Rockets.

The game remained scoreless after 20 minutes of play at Prospera Place. Kelowna changed that quickly in the second frame with a power play goal from Pavel Novak, the first of his WHL career. The Rockets would add two more to take a 3-0 lead over the Americans.

Tri-City’s only goal of the night came at 16:06 second period. Rookie forward Edge Lambert deflected a shot from Tom Cadieux to record his first WHL goal.

Edge Lambert gets the Ams on the board with his first ever WHL goal!#AmsNation pic.twitter.com/fINApGOjsn

The Americans had a big opportunity to turn the game around when Kelowna’s Michael Farren received a double minor for boarding Jan Cikhart late second period. Cikhart, the Americans’ top pick in the 2019 CHL Import Draft, returned to the game, but Tri-City was unable to score on the four minute power play.

Kelowna added three more goals in the third to record a 6-1 victory.

The Americans will return to the Toyota Center for the 2019 Home Opener this Saturday! Get details on the eventful night here.