Ams Hold On For 5-4 Victory Over Regina 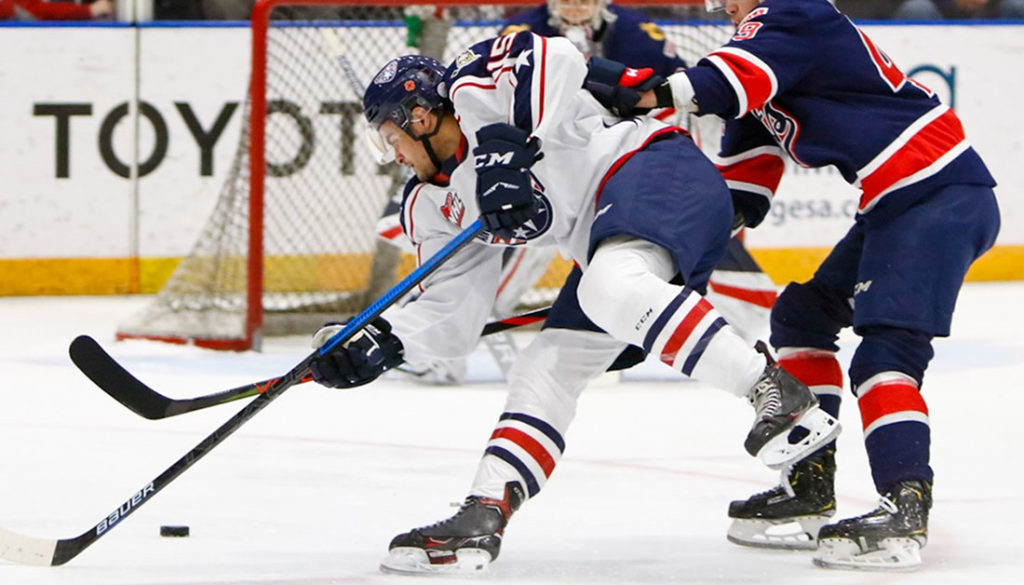 KENNEWICK, WA – The Regina Pats made their biennial visit to Kennewick today. The Americans held on to a lead through the entire game, ultimately defeating the Pats 5-4. Tonight’s win marks the fifth straight victory for the Americans against the Pats at home.

Edge Lambert opened scoring tonight at the Toyota Center off a backdoor feed from Connor Bouchard. The goal came 3:25 into the game. Tri-City went up 2-0 later in the period when Luke Zazula capitalized on a power play with a hard shot from the slot.

The Pats had a big opportunity mid-second period when Landon Roberts received a five-minute major for kneeing. Edge Lambert was called for holding during the penalty kill giving Regina two full minutes of 5-on-3. The Americans killed off both penalties to hold the Pats scoreless.

Tri-City’s penalty kill ranks 6th overall in the league at 83.8%.

Colorado Avalanche prospect Sasha Mutala scored his 15th of the season at 8:23 second period extending Tri-City’s lead to three. The goal came off an odd man rush, assisted by Sam Huo and John Little. Little’s assist marks his first point with the Americans since being acquired from Vancouver earlier in the week.

With a goal and an assist tonight Mutala extends his point streak to 12 games with seven goals and 11 assists over that period. Krystof Hrabik is also on a point streak with three goals and six assists through six games.

Hrabik, who was recently named the team’s captain, added another power play goal for Tri-City to take a 4-0 lead into the second intermission.

Talyn Boyko played the full game in net for the Americans stopping 37 of 41 shots faced.

Drew Englot scored for the Pats 5:19 into the final frame to put them on the board.

The Americans will be on the road for the next two weeks. They return to the Toyota Center on Saturday, January 25th to take on the Spokane Chiefs. Get your tickets for the popular rivalry game here.