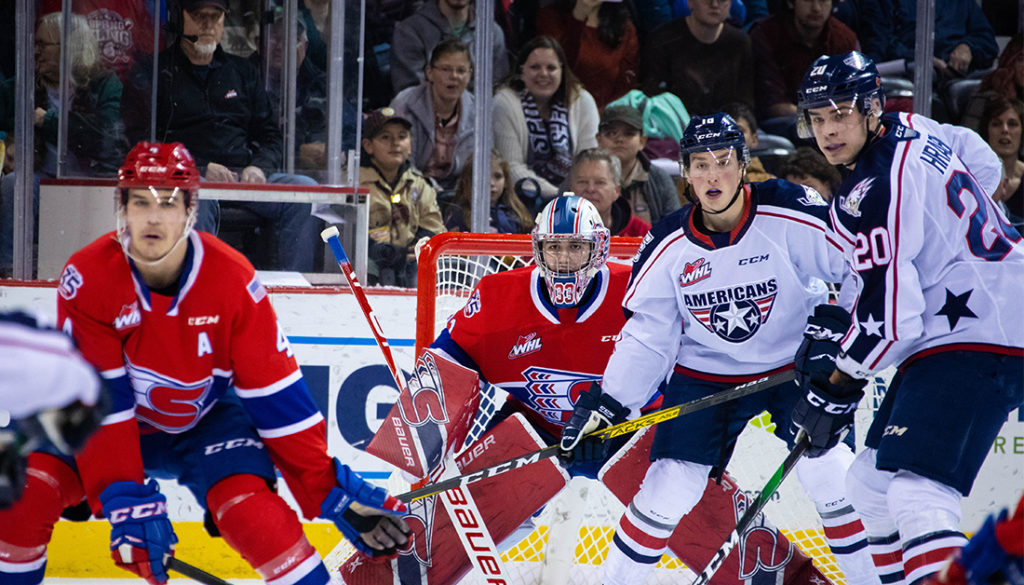 The Americans and Chiefs matched up today in Spokane for game four of their 12 game season series. After trading leads throughout the night, the Chiefs ultimately edged out the Americans to take a 4-3 win.

It was Teddy Bear Toss Night at the Spokane Veterans Memorial Arena. Adam Beckman scored the highly anticipated first goal just 41 seconds into the game. After picking the stuffed toys up off the ice, the game resumed with Spokane leading by one. Nick Bowman replied with a goal for the Americans to tie the game before the first intermission. Bowman’s goal, his seventh of the season, came as a deflection off a shot from Krystof Hrabik.

Booker Daniel gave the Americans a hot start to the second period with a rocket from the high slot to give Tri-City a lead. Cordel Larson responded for Spokane, but the Americans were able to add another taking a 3-2 lead into the final frame.

Luke Zazula scored the Americans third goal — his first since joining the team last week in a trade with Kamloops.

Luke Zazula scores his first goal since joining Tri-City last week. We have a feeling there will be many more

Zazula’s goal was Tri-City’s final of the night. The Chiefs added two more to take a final 4-3 victory.

Beck Warm started in net for the Americans. The 20-year-old goaltender stopped 46 of 50 shots faced.