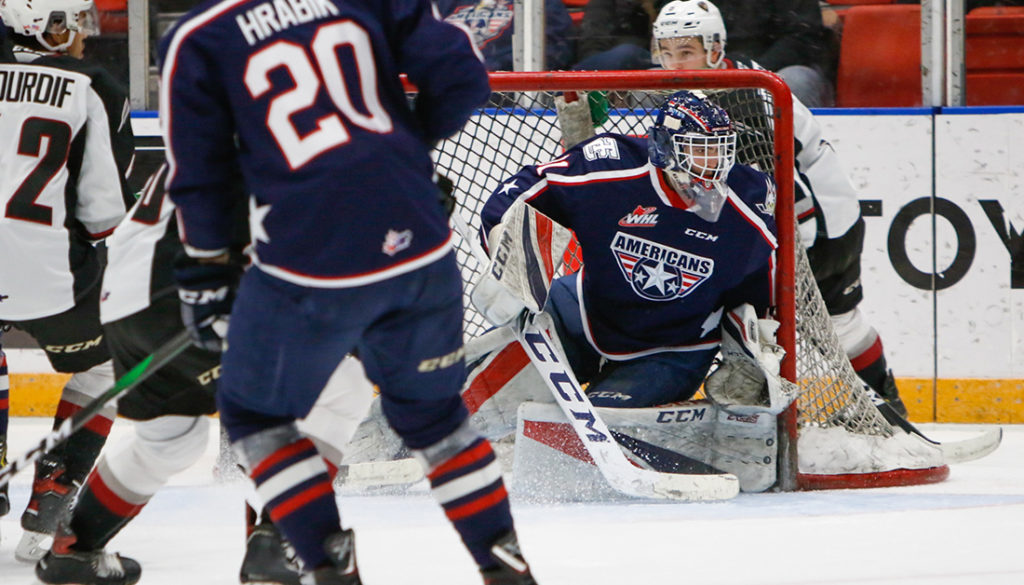 After a difficult six game stretch, the Americans ended their losing streak with a convincing victory over the Vancouver Giants tonight at the Toyota Center.

Nielsen’s goal was Vancouver’s only of the night. The Americans caught fire and replied five straight goals to take their first victory since November 11th in Edmonton.

Connor Bouchard netted Tri-City’s first goal of the night on the power play, assisted by Luke Zazula and Sasha Mutala. The assists marks Zazula’s first point with the Americans. The 19-year-old defenseman was acquired from Kamloops on Wednesday.

Connor Bouchard scores the Ams first of the night off a pass from Luke Zazula, his first point with Tri-City pic.twitter.com/fy9itfnlLx

Edge Lambert scored the go-ahead goal for Tri-City off a feed from Connor Bouchard at 15:01 first period. The Americans carried the 2-1 lead into the intermission.

San Jose Barracuda prospect Krystof Hrabik set up Nick Bowman for Tri-City’s third goal mid-second period. Six minutes later Edge Lambert netted his second of the night, on the power play, with a shot from the slot. Lambert leads all Americans rookies in scoring with 8 goals and 6 assists this season. Tonight was his first ever multi point game.

The Americans killed off all seven penalties tonight and finished 2/5 on the power play.

Talyn Boyko played the full game in net for Tri-City stopping 43 of 44 shots faced. The second year netminder has now won four of five games he’s started in this season.

The Americans next play at the Toyota Center on December 14th for the annual Teddy Bear Toss, presented by Wireless Vision and Fred Meyer. Fans are encouraged to bring new or gently used stuffed animals to the game and toss them onto the ice when the Americans score their first goal. The bears will be donated to local organizations. Tickets can be purchased here.