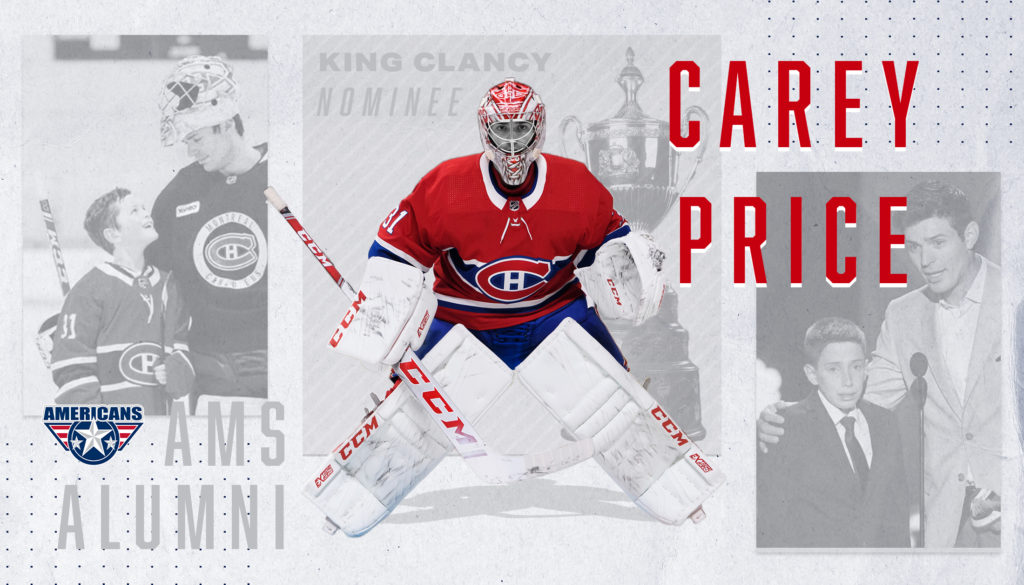 The NHL has announced Americans alum Carey Price as the Montreal Canadiens’ nominee for this year’s King Clancy Memorial Trophy. The award is presented to the player who best exemplifies leadership qualities on and off the ice and has made a noteworthy humanitarian contribution in his community.

Hailing from the Ulkatcho First Nation in Anahim Lake, British Columbia, Carey Price believes in the importance of giving back to youth from his community. He and his wife, Angela, make it a point to take the time to inspire youth to push beyond their limits and dream big. Carey Price’s calm spirit and friendly smile has an influence beyond what words can describe. Sensitive to those suffering or in desperate situations, Carey responds with empathy to a multitude of causes, using the game of hockey as a window to reach out and touch hearts.

Carey Price serves as National Ambassador for First Nations, Métis and Inuit communities on behalf of the Breakfast Clubs of Canada (BCC) since August 2014. The organization aims to provide fresh, nutritious meals for children in schools. Indigenous communities have been a priority for BCC for many years. Currently, 269 schools and 31,157 children in Indigenous communities across the country are served by the Club and its partners.

For the sixth consecutive year, Carey and Angela teamed up with the Air Canada Foundation’s Shooting for the Stars program to provide three children from indigenous communities in northern British Columbia served by the BCC with the memorable experience of flying to Montreal where they got to explore the city, watch the morning practice, skate with Carey Price and attended a Canadiens game in private suite. Since becoming ambassador, Carey and Angela take part in an annual summer fundraiser for the BCC which to date has raised more than $820,000 to support the cause.

Carey serves humbly as a role model for the many youth from First Nations communities across North America. His determination, positivity, and passion for the game of hockey provide an example to strive towards preaching that if you work hard anything is possible. When the opportunity presents itself, Carey shines a light on First Nations communities and encourages inclusion and respect for all. As social injustice was at the forefront of conversation around the world this spring, Carey’s heartfelt Facebook post touched the hearts of the hockey community.

Like many NHLers, Carey and his family returned to their home on the west coast when the season was paused. This did not stop them from serving the Montreal community. When the BCC created an emergency fund to helping food-insecure children across the country, Carey and Angela donated $50,000 to the campaign. In May, they contributed $10,000 to the Montreal Jewish Hospital Foundation’s Hero Project to provide meals to hospital staff and frontline workers. Carey was also part of a select group of hockey players who contributed to CCM’s initiative to donate 500,000 surgical marks to front-line health care workers.