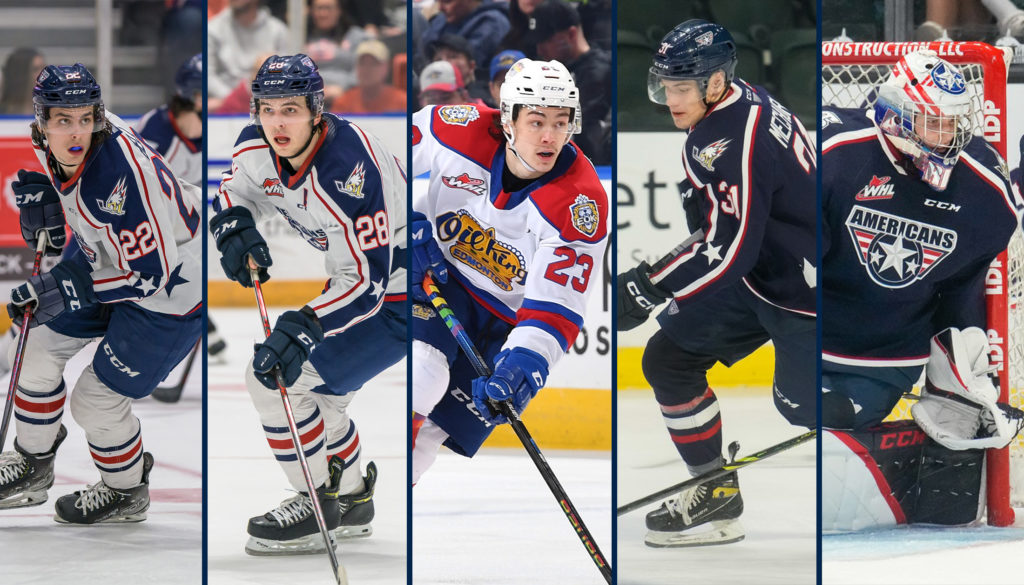 Recent Americans alum Sam Huo will also be attending an NHL camp as he joins the Columbus Blue Jackets.

Bell was selected 155th overall by the Calgary Flames at the 2022 NHL Draft in July. The Campbell River, B.C. native was selected by Tri-City in the fifth round of the 2018 WHL Prospects Draft. The six-foot-four and 200-pound forward finished the 2021-22 season with 18 goals and a team-high 31 assists through 64 games played. Before last season he had scored just once and totaled six assists over 61 games between the 2019-20 and 2020-21 seasons.

Lajoie, from St. Albert, Alta., is entering his fourth season with the Americans after setting career highs across the board in 2021-22. The 6’5” defenseman scored 12 goals and added 26 assists while suiting up for all 68 games. He was announced as the 33rd captain in Americans history in April. Lajoie was originally selected by the Americans 14th overall in the 2018 WHL Prospects Draft.

Luypen, a Kelowna, B.C. native, was selected 217th overall by the Chicago Blackhawks in the 2021 NHL Draft and recently signed a three-year, entry-level contract with the Club. Tri-City acquired Luypen over the offseason from the Edmonton Oil Kings. The five-foot-ten and 157-pound forward from Kelowna, B.C., has collected a career 124 points (61 goals, 63 assists) through 200 WHL games played. Luypen recorded a career-high 64 points last season (29 goals, 34 assists) through 66 games played. He went on to add four goals and nine assists in 19 postseason appearances, helping the Oil Kings win the Ed Chynoweth Cup as WHL champions. He played three games at the 2022 Memorial Cup, tallying one goal and two assists.

Mechura, a native of Pisek, Cze., enters his first season with the Americans after being selected fourth overall by Tri-City in the 2022 CHL Import Draft. The six-foot-four and 200-pound forward played last season in the Czechia U20 league for Bílí Tygři Liberec. Through 42 games played, he led his team with 54 goals and added 30 assists. He went on to contribute ten goals and four assists over 15 playoff games.

Netminder Tomas Suchanek, a native of Prerov, Cze., was selected by Tri-City ninth overall in the 2020 CHL Import Draft. Suchanek, six-foot and 172-pounds, played 42 games last season with the Americans, averaging 3.87 goals against and a .901 save percentage. Suchanek was named the team’s Most Valuable Player for his strong rookie season performance.