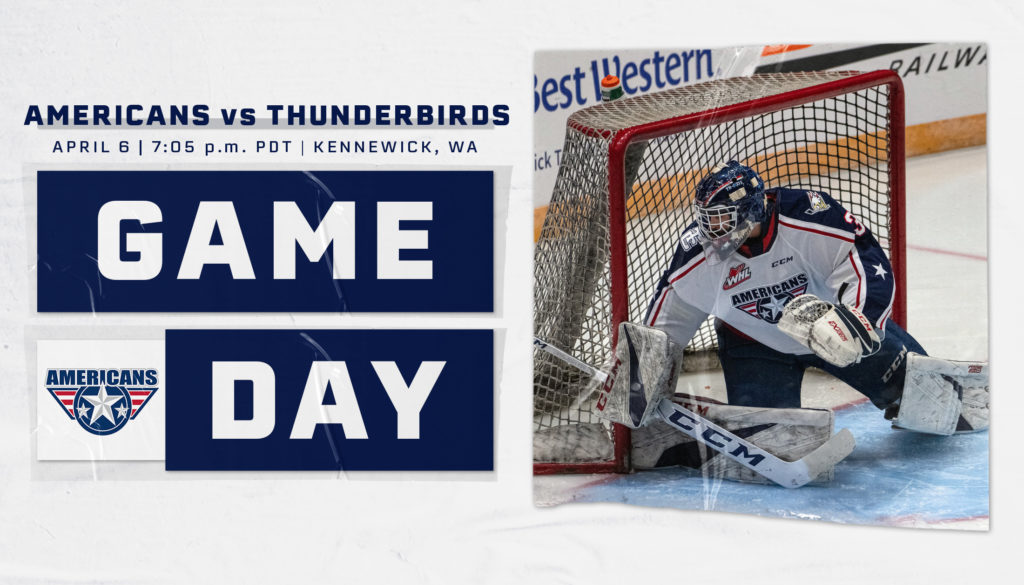 KENNEWICK, WA – The Americans will match up against the Thunderbirds for the first time in their five-game season series tonight at the Toyota Center. It will be the first meeting between the two teams in 434 days.

Both Tri-City and Seattle are coming off overtime wins against the Spokane Chiefs last weekend.

The Americans have been on a roll at the Toyota Center with wins in three of their four games at home this season. They will look to continue that success and earn their first back-to-back win of the season tonight.

Over the past five seasons Tri-City is 11-12-1-1 head-to-head against Seattle. They have had the most success against the Thunderbird at the Toyota Center with a 8-4-1-0 home record.

Talyn Boyko has started in net for all but one of the Americans games this season. The six-foot-eight netminder has improved his goals-against average to 2.79 from 4.52 in 24 games played last year. He currently has a 0.899 save percentage.

After only appearing in two games last year, rookie goaltender Thomas Milic has played in seven of Seattle’s eight games so far this season. He boasts a 0.918 save percentage and 2.66 goals-against average.

Sam Huo has been the Americans scoring leader all season. He has five goals and two assists so far this season. Tonight’s game against Huo’s former team will be his 200th career game played. Ninety-nine of those games have been with the Americans and 101 with the Thunderbirds. Tri-City acquired Sam Huo on January 10th, 2019 from Seattle in exchange for a fifth-round pick (READ).

For the Thunderbirds, Connor Roulette is the leading scorer with five goals and five assists.

The Americans last played on Saturday when they took a 3-2 overtime win over Spokane. Luke Zazula netted the game-winner, his first goal of the season, just 18 seconds into the extra frame.

Sam Huo opened scoring in the second period with Tri-City’s first shorthanded goal of the season, assisted by Booker Daniel. Just over two minutes later the Chiefs responded on the power play to tie the game at one.

Later in the period, Tyson Greenway would capitalize on a breakaway opportunity and put the Americans back in front. The goal was assisted by Jake Sloan and Bryson Andregg, marking Andregg’s first WHL point.

The Americans held on to their one goal lead into the second intermission. 59-seconds into the third period the Chiefs scored and once again tied the game.

Talyn Boyko made his second start in as many nights for the Americans. He stopped 20 of 22 shots faced from the Chiefs.

The game held tied at two and extended into overtime where Luke Zazula quickly sealed a win for the Americans. Zazula’s game winning goal came 18 seconds into the extra frame assists by Sam Huo and Booker Daniel.