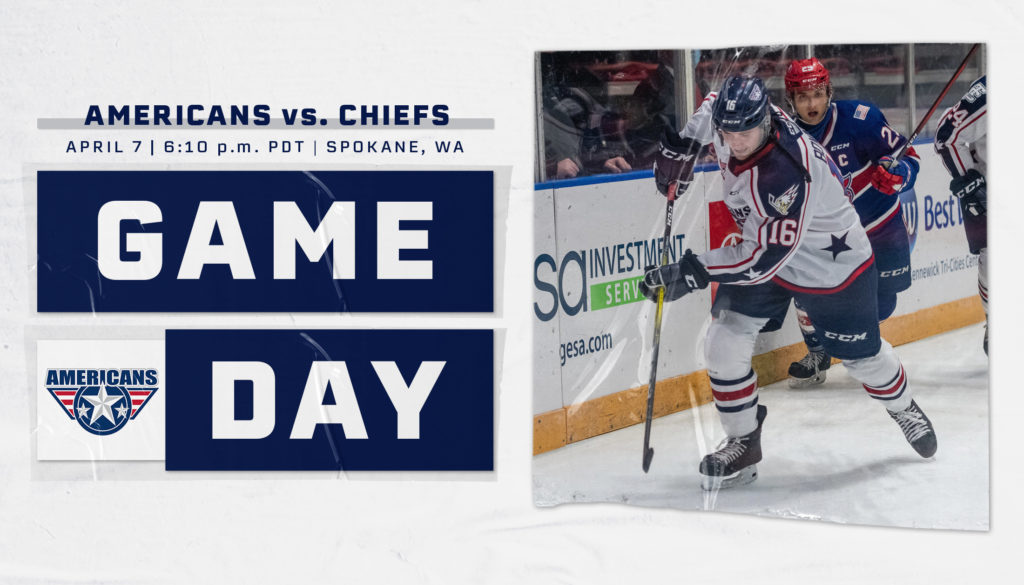 Kennewick, WA – The Americans and Chiefs have already met twice this season in Kennewick with the Americans taking victory both times. Tonight the two teams will match up in Spokane as the Americans look to extend their streak to three straight wins.

The Americans and Chiefs will match up tonight for the third time in their eight game season series. The game will be their first meeting of the season in Spokane. In the two prior games in Kennewick, the Americans won with a 3-0 shutout and 3-2 overtime victory.

Both teams most recently played Seattle. Last night the Americans took a 5-2 win against the Thunderbirds while the Chiefs were defeated 5-4 in overtime by Seattle on Sunday.

Tri-City comes into tonight’s game off two straight wins but have yet find victory on the road this season. All four Americans wins have came at home. Meanwhile, the struggling Chiefs are still looking for the first win this season.

The Americans took a dominate 5-2 victory over the Thunderbirds last night at the Toyota Center as the two teams played each other for the first time this season.

The Thunderbirds opened scoring just 1:45 into play, but 33 seconds later Ian Ferguson replied for the Americans to tie the game. The goal was Ferguson’s first in the Western Hockey League.

The rapid scoring continued with a goal from Sam Huo less than 20 seconds later. Through nine games played Huo leads the Americans in scoring with six goals and two assists.

The Americans were outshot 12-4 through the first period but held on to a 2-1 lead into intermission.

Thirty-one seconds into the second frame Connor Bouchard slipped the puck past Thunderbirds netminder Jackson Berry extending the Americans lead to 3-1. Later in the period rookie forward Jake Sloan set up Booker Daniel on an odd-man rush for Tri-City’s fourth goal of the night.

Seattle added one more goal in the final period, but the Americans held them off for the rest of the game and added an empty net goal from Mitchell Brown to seal a 5-2 win.

Talyn Boyko played the full game in net for the Americans. He stopped 28 of 30 shots faced.