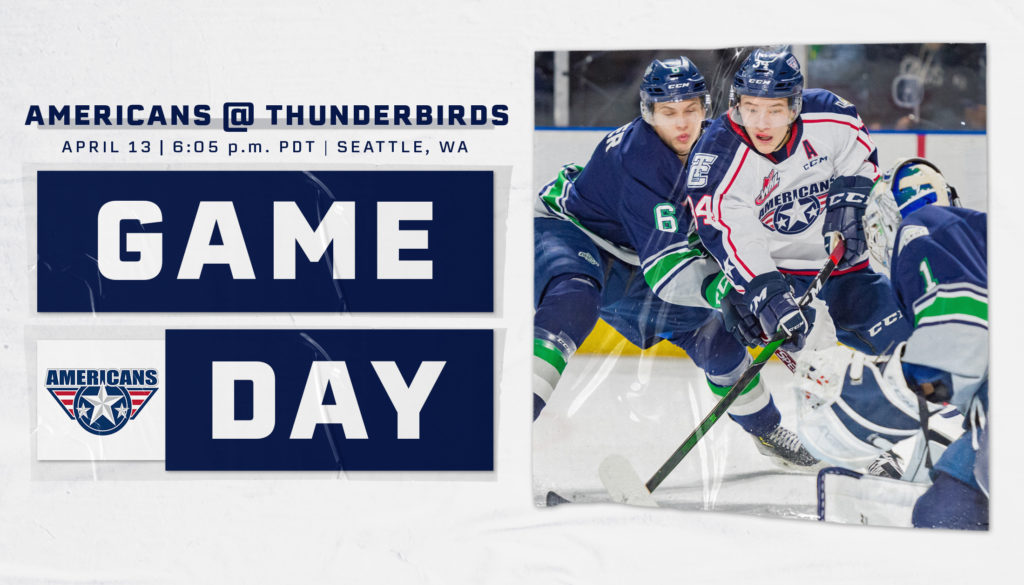 The Americans and Thunderbirds will play tonight for the third time in their five game season series. It will be their first meeting this year at the accesso ShoWare Center.

Both teams most recently played each other on Sunday in Kennewick when the Thunderbirds took a 3-2 win over the Americans. Four of the five goals Seattle has scored against Tri-City this season have been on the power play. Through two games Seattle has had 15 power play opportunities while the Americans have had eight against Seattle.

Talyn Boyko has played in net for the Americans both games against Seattle. Through two games he’s stopped 51 of 56 shots from the Thunderbirds for a 0.910 save percentage and 2.54 goal against average. He is projected to make his seventh straight start tonight.

Mitchell Brown leads the Americans in goals against the Thunderbirds with two. The 19-year-old defenseman will miss tonight’s game with an upper-body injury.

Colorado Avalanche prospect Sasha Mutala comes into tonight’s game on a four game point streak with one goal and four assists over that period (including one goal and two assists against Seattle).

The Americans found themselves in penalty trouble on Sunday as they were defeated 3-2 by the Seattle Thunderbirds. All three of Seattle’s goals were scored on a power play. The victory pushed the Thunderbirds into second in the US Division behind the Everett Silvertips.

Jared Davidson capitalized on an early man-advantage to put Seattle on the board first. Seattle held on to their one-goal lead until late in the first period when the Americans responded with their own power play goal from Sasha Mutala. Mutala’s goal, his fourth of the season, was scored from the goal line off a sharp-angle shot. Edge Lambert and Luke Zazula assisted the goal. Just 40 seconds later, the Americans followed with a goal from Mitchell Brown to take the lead. After a scramble in front of the net Brown found the loose puck in the slot and shot it over Thomas Milic’s right shoulder. The goal was assisted by Alex Serraglio, his first Western Hockey League point, and Nick Bowman.

The game turned back in favor of the Thunderbirds 4:21 into the second frame when Henrik Rybinski scored their second power play goal. Seconds after the goal Seattle found themselves back on the power play. Jordan Gustafson quickly capitalized on the opportunity and the Thunderbirds took a 3-2 lead.

Tri-City was 1/4 on the power play and Seattle went 3/9. Nine power play opportunities against is a season-high for the Americans.

Talyn Boyko played his sixth straight game in net for the Americans and stopped 23 of 26 shots faced.