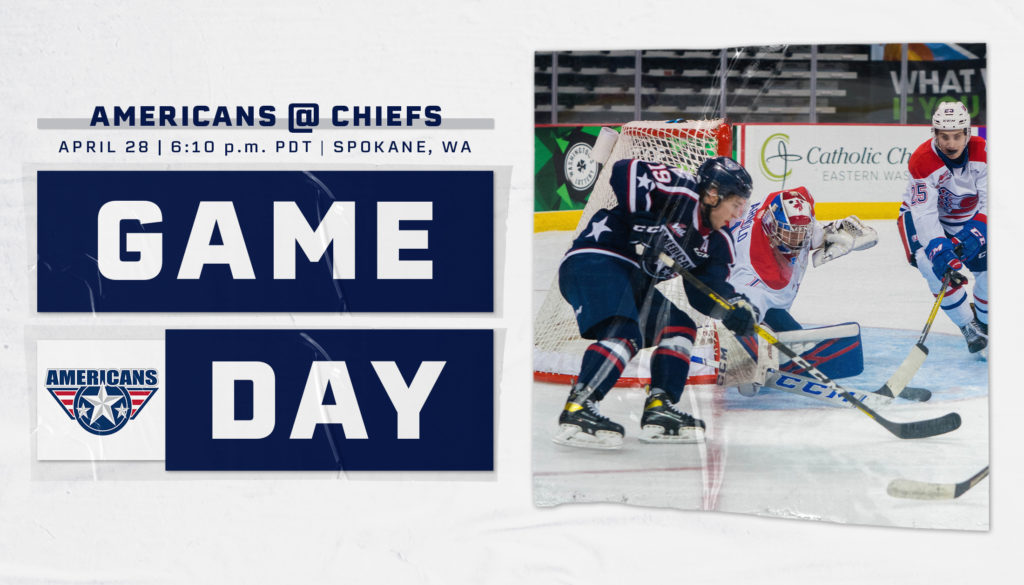 The Americans return to game action tonight for the first time since Tuesday, April 13th. All team activities were suspended on April 17th as a result of a positive COVID-19 test within the team cohort. After ten days of isolation the Americans were cleared to resume activities and had their first practice on Monday. Tonight they will look to open their final five-game stretch with a victory in Spokane.

The Chiefs and Americans face off tonight for the fourth time this season. So far the home team has been victorious in the three previous meetings with Tri-City taking victory in the first two games and Spokane in their most recent matchup on April 7th.

Both teams come into tonight’s game on a two game losing streak and 2-3-0-0 over their last five games.

The Americans most recently played on April 13th in Seattle. They struggled to find the net as they fell 4-2 to the Thunderbirds.

Seattle opened scoring early first period. The Americans responded 14 minutes later with a goal from Edge Lambert, his second of the season in as many games. Lambert’s goal came assisted by Booker Daniel and Bryson Andregg.

Trailing by two goals late in the third period, the Americans pulled netminder Talyn Boyko for an extra attacker with nearly four minutes remaining in the game. Rookie Jake Sloan was able to capitalize on the opportunity and net Tri-City’s second goal of the night. Sloan’s goal was assisted by fellow 2004-born forward Rhett Melnyk and Marc Lajoie.

Talyn Boyko played his seventh straight game for Tri-City. The 2002-born netminder made 32 saves on 35 shots.