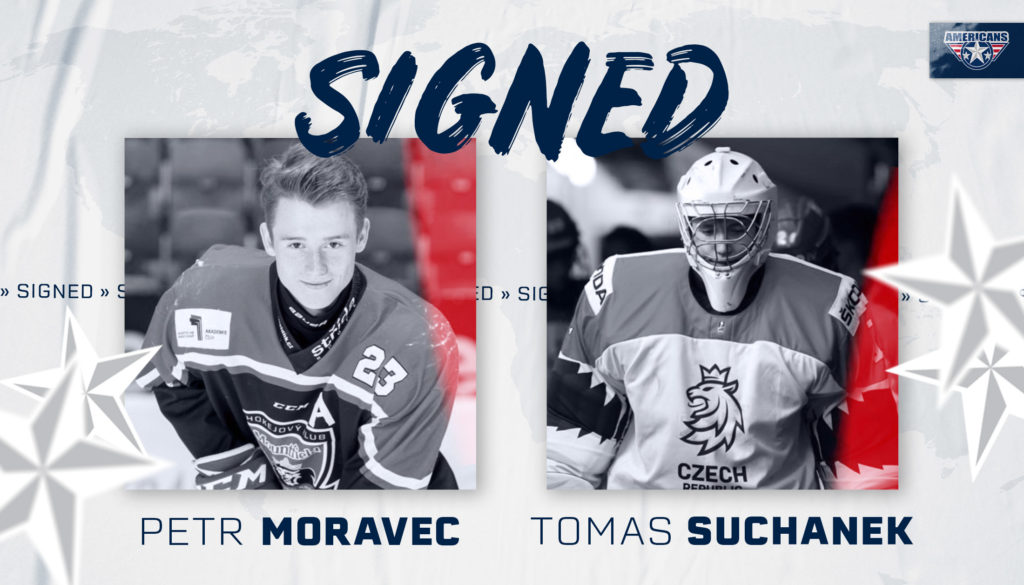 “We are excited to have Tomas and Petr join our team for the 2021-22 season,” stated Tory. “Both are exciting players who will bring skill and international experience to our roster.”

The Americans selected Moravec in the 2021 CHL Import Draft with the 57th overall pick. The six-foot and 181-pound right-winger played last season in the Czech2 league with HC Stadion Litomerice. He recorded one goal and three assists in ten games played. He also played in the Czech U20 league with HK Hradec Kralove where he contributed one goal and three assists through four games.

NHL Central Scouting lists Moravec 82nd amongst international skaters as a prospect for the 2021 NHL Draft.

“I wanted to move up a level again and the WHL is a high-quality league,” said Moravec. “I am looking forward to this opportunity. The Americans are a very good team and I believe we can make this season a success.”

The Americans selected Suchanek in the 2020 CHL Import Draft at ninth overall. The six-foot-one and 180-pound netminder is ranked sixth amongst international goaltenders on NHL Central Scouting’s List for the upcoming NHL Draft. Through 21 games played with HC Frydek-Mistek last season, Suchanek averaged 3.12 goals against and a .908 save percentage.

“It has been one of my dreams to play hockey in America,” said Suchanek. “I have talked to guys that played in the CHL and they all said it was the best years of their career. I am honored to be part of this great organization.”

Over the past two seasons, Moravec and Suchanek have gained international experience playing together with the Czech Republic at the World U-17 Hockey Challenge and the U-18 World Championship.

Both players will join the Americans for the 2021-22 season.