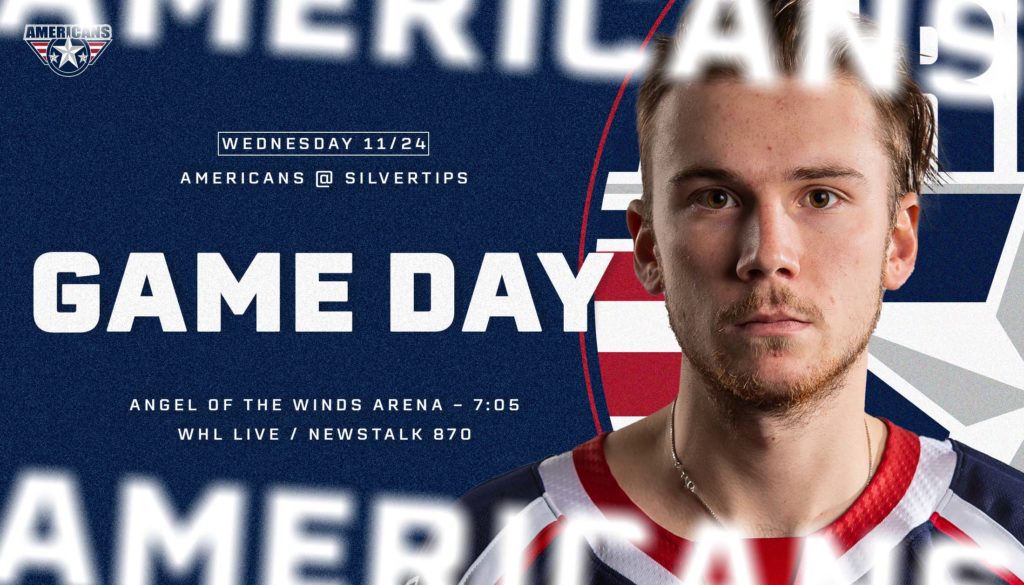 The Americans will play their first weekday game of the season today as they take on the Everett Silvertips at Angel of the Winds Arena.

Tri-City and Everett will meet tonight for the second time in their 12 game season series. Their previous meeting came on November 12th at Angel of the Winds Arena, the Silvertips took a 6-0 victory over the Americans with netminder Koen MacInnes earning a 14 save shutout. All six of Everett’s goals came from six different goal scorers. Michal Gut was the points leader that night with three assists against the Americans. Nick Avakyan played in net for the Americans, stopping 39 of 45 shots faced. Tri-City was out shot 45-14.

Last weekend the Americans were in Prince George for a double header against the Cougars. They split the weekend, with a 4-3 victory on Friday and falling 4-2 on Saturday. Tri-City’s two goals on Saturday came from Ethan Ernst and Jake Sloan. Ernst has scored five goals in eight games since being acquired by the Americans in a trade with the Kelowna Rockets. Jake Sloan has now scored in back-to-back games. Tomas Suchanek returned to the Americans lineup tonight after missing ten games due to injury. The Czech netminder stopped 32 of 36 shots faced from the Cougars. Tri-City was out shot 36-31 by the Cougars in Saturday’s 4-2 loss.

The Silvertips most recently played on Sunday, defeating the Thunderbirds 5-2 in Everett.

Everett comes into tonight’s game with a 15-0-0-1 record. The Americans will look to hand them their first regulation loss of the season and get back into the win column.