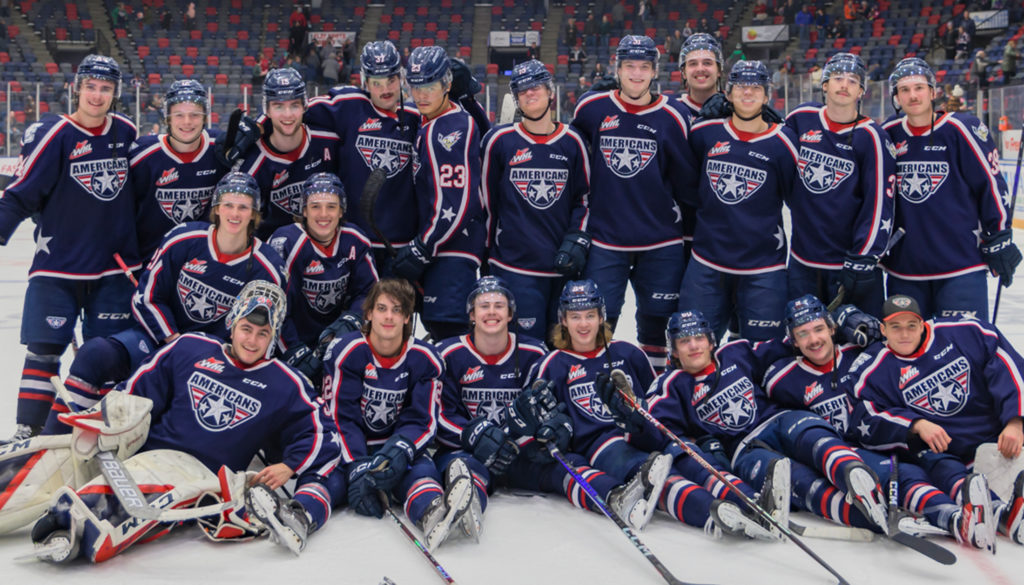 Nick Avakyan’s 42 save performance led the Americans to a 4-3 victory over the Seattle Thunderbirds on Sunday. Tri-City swept their weekend at home as they also defeated Spokane 4-2 on Saturday at the Toyota Center.

Thunderbirds defenseman Jeremey Hanzel opened scoring seven minutes into the game with a wrist shot from the right circle beating Avakyan on the glove side. Tri-City was narrowly outshot 10-9 and trailed 1-0 after the first period.

Tri-City tied the game at 1-1 early into the second frame with a shorthanded goal from Ethan Ernst after Jake Sloan took a penalty for tripping. Marc Lajoie cleared the puck down the ice and Seattle goaltender Scott Ratzlaff played the puck directly toward the Americans forward. Ernst tucked the puck behind Ratzlaff to tie the game for Tri-City with his second shorthanded goal of the season.

The Americans took the lead three minutes later as Adam Mechura redirected a shot from Lukas Dragicevic over the blocker of Ratzlaff. Later in the period, Tri-City added another as Jordan Gavin swept in a shot from Adam Mechura, extending their lead to 3-1.

Seattle slowed Tri-City’s momentum as Hanzel netted his second of the night with ten seconds remaining in the second frame. The goal was scored with a redirection around the blocker of Avakyan, cutting Tri-City’s lead to 3-2 heading into the final period. The Americans were outshot 13-10 through the middle period.

Lukas Dragicevic scored the eventual game-winning goal with a shorthanded marker early third period. With Tyson Greenway in the box for slashing, Dragicevic forced a turnover in his own zone setting himself up for an odd-man rush. The right-handed defenseman scored top shelf, short side on Ratzlaff to put the Ams up 4-2. It was Dragicevic’s first career shorthanded goal.

This shorthanded goal from Lukas Dragicevic has us speechless! 😮🔥

The 2023 NHL Draft prospect extends his point streak to 17 games with a goal and an assist on Sunday. He has six goals and 19 assists over that period.

Lucas Ciona scored with three minutes remaining in the game to put Seattle back within one of the Americans. The Calgary Flames prospect picked up a rebound off a shot from Kevin Korchinski and tucked it through the five hole of Avakyan to cut Tri-City’s lead to 4-3.

Seattle continued to put pressure on Tri-City. The Thunderbirds led shots 22-2 through the final period. Avakyan put on an impressive show in net and held onto the victory for Tri-City.

The Glendale, Calif. native turned aside 42 of 45 shots faced.

The Americans will return to the Toyota Center for another pair of home games this upcoming weekend as the Lethbridge Hurricanes and Kelowna Rockets visit Kennewick.