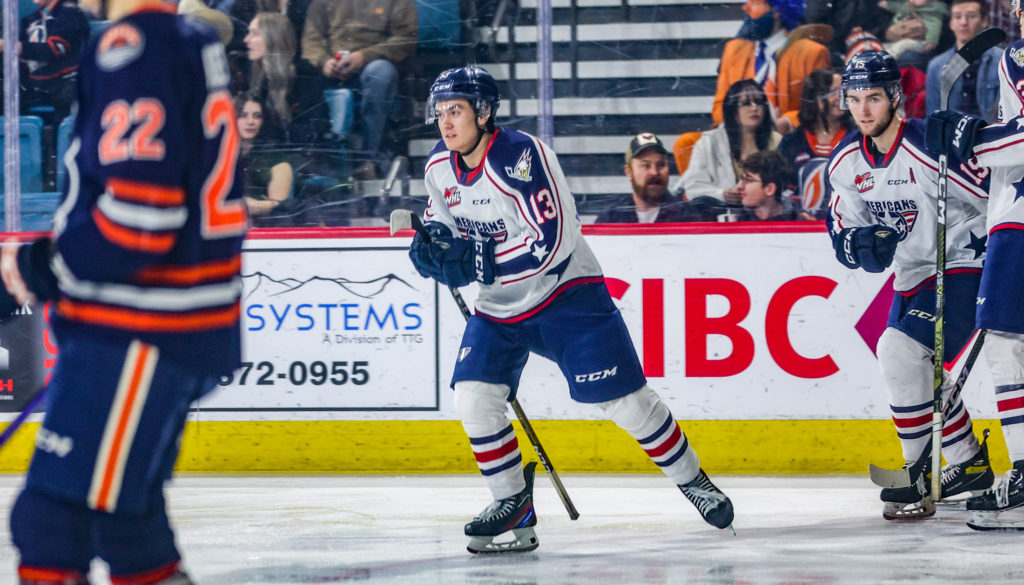 The Americans opened a weekend doubleheader in Kamloops with an impressive 8-2 victory, led by Parker Bell with his first WHL hat trick.

Bell, a Calgary Flames prospect, opened scoring 3:58 into the first period as he shoveled in a rebound off a shot from Andrew Fan. The Blazers replied late in the period with a goal from each Harrison Brunicke and Connor Levis to take a 2-1 lead into the first intermission.

Tri-City’s offense broke out in the second period as the went on to score six unanswered goals through the remainder of the game.

With Fraser Minten in the penalty box for slashing, Tomas Suchanek played the puck to Jake Sloan setting up a scoring opportunity for Jordan Gavin. The 16-year-old rookie scored with a quick shot short-side on Blazers goaltender Dylan Ernst. Deagan McMillan followed three minutes later with a backdoor goal scored off a cross-crease feed from Jalen Luypen, taking back the lead for Tri-City. The Americans continued to build on their lead as Bell scored off a breakaway set up by a stretch pass from McMillan. The Americans took a 4-2 lead into the second intermission.

The Ams offensive explosion carried into the third period as Adam Mechura scored on the power play just 27 seconds into the final frame. The Czechia native has had two points in each of his three games since returning from the World Junior Championship, including a goal and an assist tonight. Tri-City quickly found themselves back on the power play. Gavin capitalized on the opportunity, scoring his second goal of the night with a shot down the slot.

Bell also scored on the power play, recording his first WHL hat trick with 6:14 remaining in the game.

Elouann Lemonnier went on to add one last goal for the Americans, finalizing the 8-2 victory.