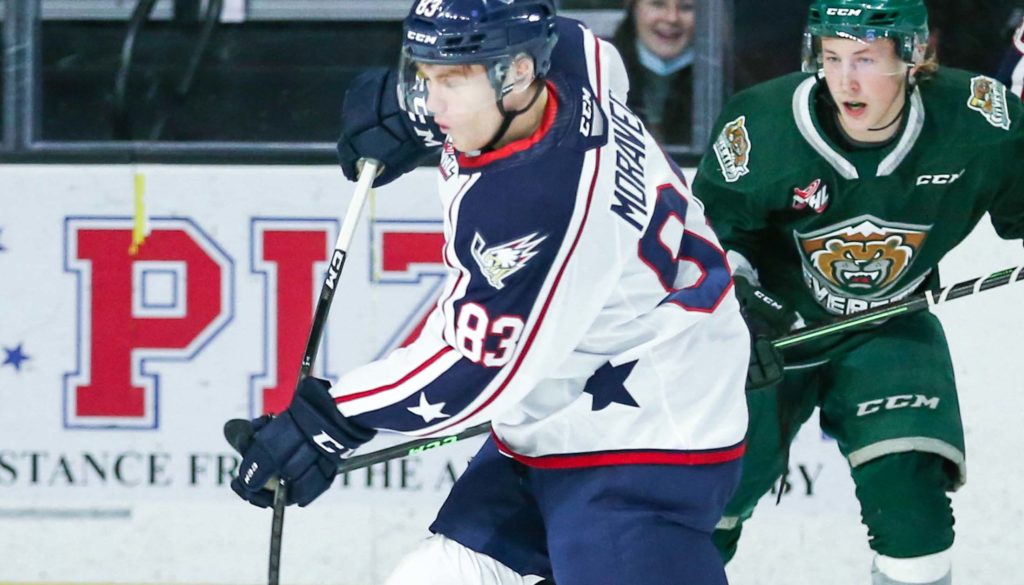 The Americans matched up against the Everett Silvertips today at Angel of the Winds Arena, falling 6-2.

Tomas Suchanek started in net for the Americans for the second straight game after his return from an upper body injury. The Czech netminder kept the Americans in the game as he held Everett scoreless until the midway point of the second period.

Michael Gut finally opened scoring 9:09 into the second period with a power play goal. Hunter Campbell followed five minutes later with another goal for the Silvertips. They carried a 2-0 lead into the second intermission.

Suchanek turned aside 43 of 45 shots faced through the first two periods.

Nick Avakyan relieved Tomas Suchanek in net for the remainder of the game.

Everett’s string of goals continued as Niko Huuhtanen added another at 5:47 for the third Silvertips goal in just over three minutes.

The Americans finally broke through two minutes later on the power play as Ethan Ernst scored with a wrist shot from the right circle. Marc Lajoie and Tyson Greenway received assists on the goal. Greenway now has one assist in each of the last four games. Ernst, who joined the Americans on October 23rd, has scored six goals in nine games with the team.

Making it happen on the power play 🚨 pic.twitter.com/GYT0TaQJxl

Hunter Campbell scored a sixth and final goal of the night for the Silvertips.

The Americans continued to play hard in the final minutes of the game. With 1:12 remaining, Petr Moravec scored backdoor on Silvertips netminder Braden Holt with a one-timer from the bottom of the right circle. Jake Sloan assisted the goal as he sent the puck across the crease to Moravec.

Sasha Mutala returned to the Americans lineup tonight. The 20-year-old right winger was reassigned by the Colorado Eagles three weeks ago.

The Americans return to the Toyota Center on Friday to take on the Vancouver Giants for the first time since the 2019-20 season. Single game tickets can be purchased at the Toyota Center Box Office or online from Ticketmaster here. For information on how you can build your own ticket package and save with Americans Flex Packs, click here!