Recap: Americans offense breaks out in 8-3 win over Cougars 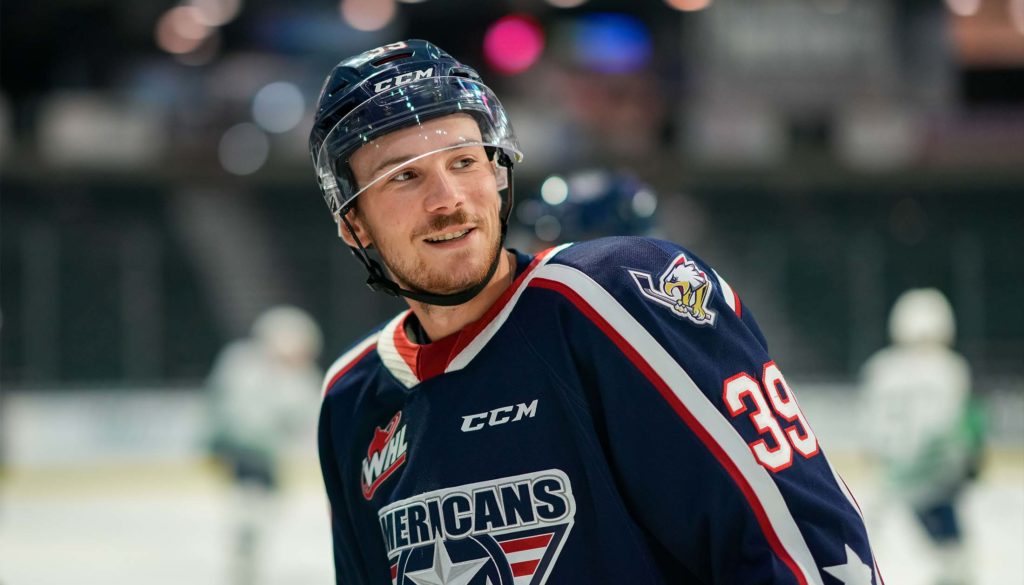 The Tri-City Americans wrapped up an opening weekend doubleheader in Prince George today with a dominate 8-3 victory over the Cougars. Six different players scored and Tomas Suchanek turned aside 38 shots, contributing to Tri-City’s first victory of the season.

Prince George opened scoring at the CN Centre five minutes into the game with a goal from Koehn Ziemmer.

Tri-City’s deficit didn’t last for long as Reese Belton scored halfway through the first period to tie the game at one. Belton’s goal, his first as a Tri-City American, was set up by Drew Freer after a forced turnover behind Prince George’s net. Nick Anisimovicz also recorded an assist on the goal, his first WHL point.

Belton, a 20-year-old forward, was acquired by Tri-City over the offseason from the Kamloops Blazers (read).

Momentum continued for the Americans as they quickly followed with two power play goals.

Tri-City’s three goals came within a span of just over four minutes, giving them a 3-1 first period lead.

Despite their lead, Tri-City trailed shots-on-goal 13-9 after twenty-minutes of play.

The Americans were out shot 16-5 during the second period.

Tri-City broke away during the third period as they scored four unanswered goals.

Blake Eastman received a double-minor penalty for high-sticking Lukas Dragicevic, putting the Americans on a four minute power play. Adam Mechura capitalized on the opportunity for Tri-City as he scored his first WHL goal with 12:00 remaining in the game.

After going 0/5 with a man advantage last night, the Americans found their stride tonight. Tri-City scored on each of their first three power plays and finished the game 3/5.

The Americans continued to build their lead as 2023 NHL Draft prospect Lukas Dragicevic scored with a hard one-timer from the high slot, set up by Tyson Greenway.

Tomas Suchanek played the full game in net for Tri-City, making 38 saves on 41 shots faced, including several highlight-worthy stops in the final minutes of the game.

Tri-City’s Home Opener will take place on October 8th at the Toyota Center as the Americans host the Edmonton Oil Kings. Save with an Americans Flex Pack, our most flexible ticket option.

When the Americans win on the road, you get free Jack in the Box Curly Fries back home! Show this coupon at our local Kennewick Jack in the Box over the next three days.