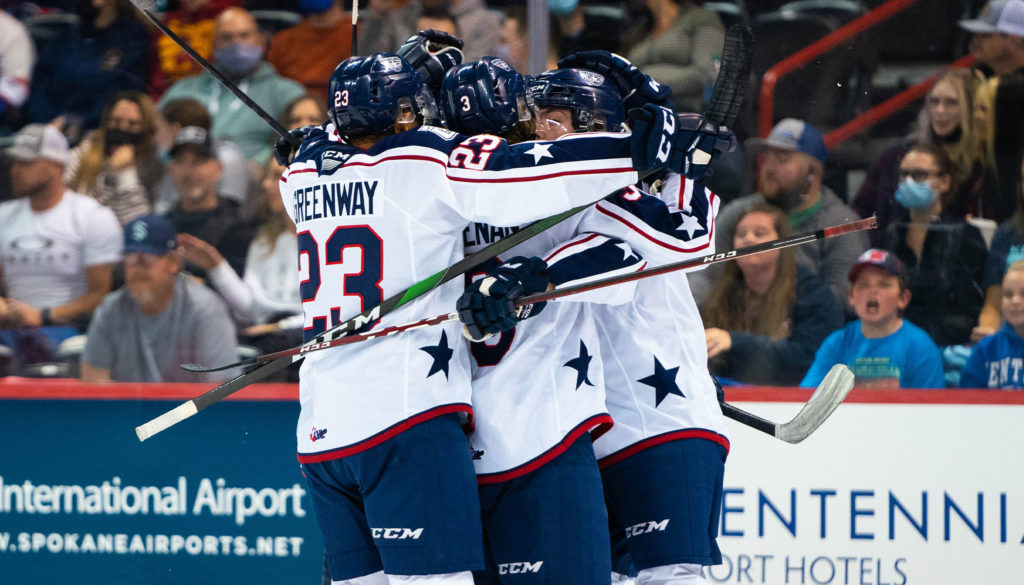 Kennewick, WA – After defeating the Winterhawks last night in a shootout, the Americans earned another hard-fought victory tonight in Spokane, beating the Chiefs 5-3.

Jack Finley put Spokane on the board first tonight just 3:08 into the game as the puck slid under Americans goaltender Tomas Suchanek after a partial save.

Halfway through the period Bryson Andregg replied for the Americans with a wrist shot from the high slot that snuck through traffic past Chiefs netminder Campbell Arnold. The goal was the defenseman’s first in the WHL.

The game didn’t stay tied long as Raegan Wiles put the Chiefs back in front two minutes later with a power play goal.

Tonight was Suchanek’s first WHL start in net. The 18-year-old Czech Republic native made a series of impressive saves early as the Chiefs controlled most of the first period. Tri-City was out shot 18-3 through 20 minutes.

Petr Moravec, also a CHL Import Draft selection from the Czech Republic, tied the game for Tri-City 7:31 into the second period. The goal was scored on the power play off a one-timer from the right circle.

The Americans struggled to gain momentum as the Chiefs once again took the lead just two minutes later with a power play goal from Luke Toporowski. Tri-City was out shot in the second frame 19-5.

The turning point in the game came 4:20 into the the third period.

A minute into the man-advantage, Tyson Greenway capitalized on the opportunity as he shoveled in a net-front pass from Elouann Lemonnier to tie the game at 3.

Campbell was able to hold of Tri-City for the rest of the 5-on-3 power play, but the Americans carried their momentum into even-strength play.

With 4:42 remaining in the game, Parker Bell scored to give the Ams their first lead of the night. Dwayne Jean Jr. made a great stretch pass across the neutral zone to Bell at the blue line, who walked it in and scored backhand on Arnold.

Jean Jr. and Dragicevic both recorded their first points on the goal.

Tri-City’s next game will be at home against the Chiefs next Saturday. You can check out available ticketing options here.