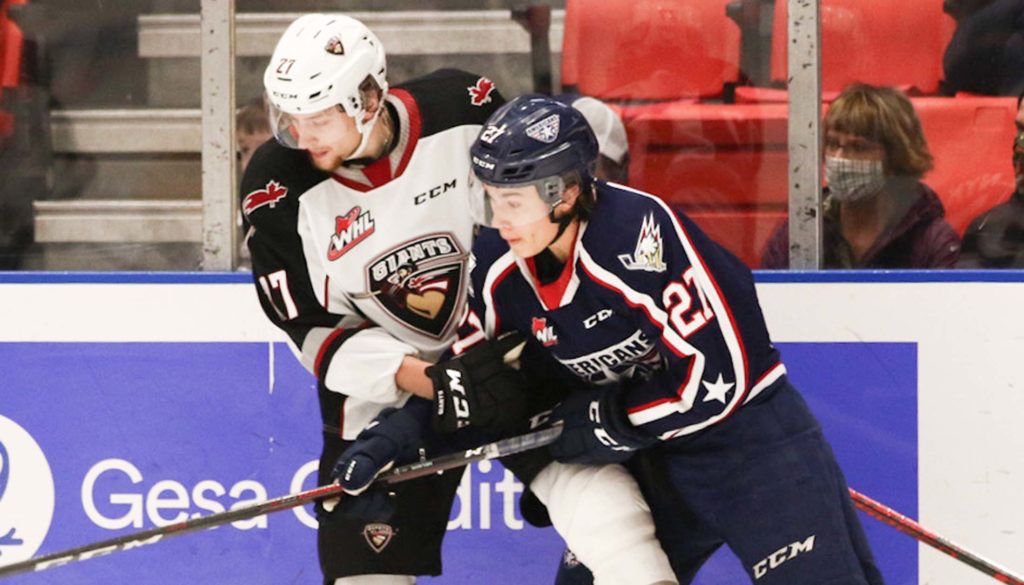 Kennewick, WA – The Tri-City Americans matched up against the Vancouver Giants today. It was the first game against a Canadian team at the Toyota Center since March 2020. Tri-City had a strong start but struggled to hold off the Giants, falling 3-1.

The Americans got on the board first tonight as Carson Haynes took a shot from the point and it was deflected past Vancouver goaltender Jesper Vikman by Sasha Mutala. It was Mutala’s first goal this season. The 2001-born forward was reassigned to the Americans by the Colorado Eagles earlier this month. He played his first game of the season last Wednesday in Everett.

Tri-City held on to their 1-0 lead into the second period.

Vancouver defenseman Alex Cotton took a shot from the right circle that was turned aside by Americans goaltender Tomas Suchanek. Ty Thrope cleaned up the rebound and scored to tie the game for the Giants. The goal came on the power play 7:00 into the second period.

Suchanek put on a show for Americans fans at the Toyota Center as he made a series of big saves to keep the game tied into the third period.

Giants captain Justin Sourdif gave his team the lead as he scored short side with a wrist shot from the right circle. Late in the third period, Fabian Lysell scored an insurance goal for Vancouver to seal the victory off an odd-man rush.

The Americans will play tomorrow in Seattle and then return to the Toyota Center on Wednesday to take on the Victoria Royals.