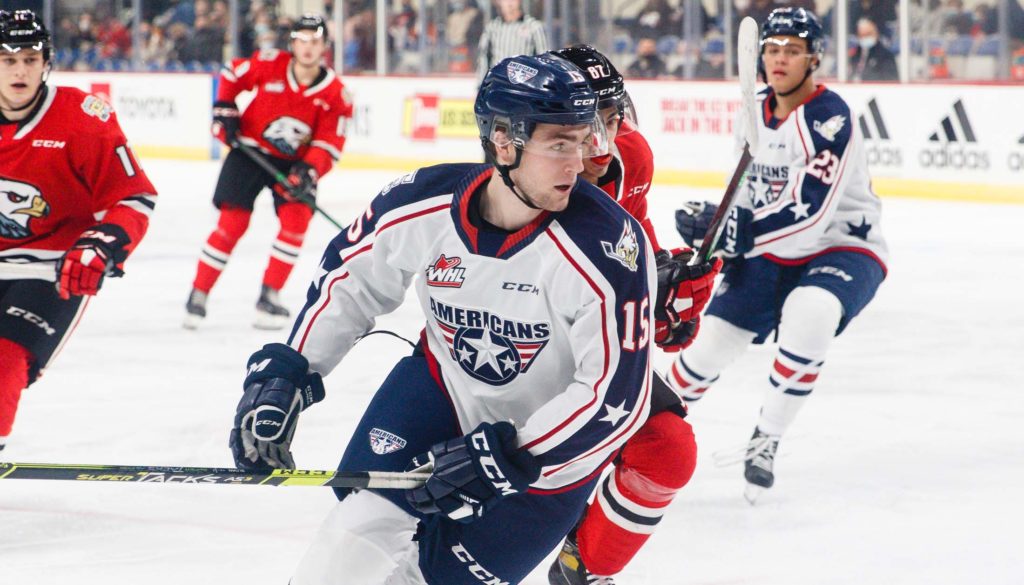 Kennewick, WA – After starting the season 2-0, the Americans are now 2-3-0-0 after losing three straight games.

Tri-City struggled to find the net last night as they were blanked 3-0 by the Spokane Chiefs in Kennewick. New York Rangers prospect Talyn Boyko played the full game in net, stopping 30 of 33 shots faced.

Today the Americans hit the road to take on the Winterhawks in Portland. The Americans got on the board first 13:32 into the game as Rhett Melnyk forced a Portland own goal on power play, ending Tri-City’s five period scoring drought. The goal counts as Tri-City’s second shorthanded goal of the season, both by Rhett Melnyk.

With seconds remaining in the first period, Landon Roberts swept in a loose puck in front of the net to extend Tri-City’s lead to two. The goal is Robert’s first from February 2020 in Swift Current. Tanner Gould received his first WHL point on the goal.

The Americans’ scoring momentum continued with a goal from Parker Bell 6:45 into the second period. Petr Moravec forced a turnover with a poke check in Portland’s zone and took a wrist shot from the blue line that was deflected in by Bell. The goal, Bell’s third of the season, extended Tri-City’s lead to 3-0.

Petr Moravec and Parker Bell showing off their skill in Portland tonight. 🤩 pic.twitter.com/TsSpf564Zl

Less than a minute later Marcus Nguyen scored for Portland to put the Winterhawks back within two. The score held at 3-1 into the final frame.

Tri-City’s hopes of getting back in the win column began to fade as Gabe Klassen added a second Winterhawks goal two minutes into the third period. Dawson Pasternak tied the game on the power play, his first career goal, with 5:19 remaining in the game. Marek Alscher followed with Portland’s game winner, also his first in the WHL.

Talyn Boyko, who turned 19 today, once again played the full game in net for the Americans. He stopped 35 of 39 shots faced. Portland out shot the Americans 39-28.

Tri-City will return to the Toyota Center next weekend for back-to-back home games. Single game tickets can be purchased at the Toyota Center Box Office or online from Ticketmaster here. For information on how you can build your own ticket package and save with Americans Flex

Americans Battle Back to Earn Point, Fall Short in Overtime
15 hours ago
3:21
Video Highlights: 12/1 vs. Victoria
15 hours ago