Recap: Americans Unable to Hold Off Rockets, Fall 5-3 in Kelowna 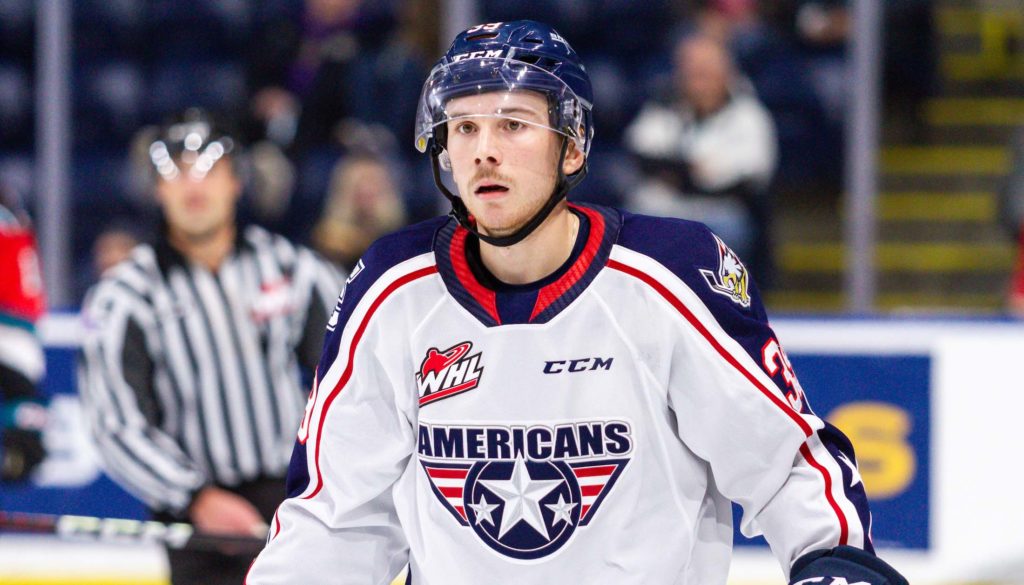 The Americans faced off against the Rockets tonight for the first time this season, falling 5-3 in Kelowna.

The game started off with a fast pace as shots were 21-17 in favor of Kelowna through the first 20 minutes. Jackson DeSouza opened scoring for the Rockets eight minutes into the game with a slapshot from the blueline. The Americans followed four minutes later with a goal from Ethan Ernst, scored as the puck bounced through the crease off a shot from Adam Mechura. Parker Bell took a minor penalty for high sticking late in the first period, but that didn’t slow down the Americans. Tyson Greenway scored off a shorthanded breakaway set up by a stretch pass from Ernst. Tri-City carried their 2-1 lead into the first intermission.

The Ams carried their momentum into the middle frame. Two minutes into the period, Ernst picked up his own rebound in the corner and set up Reese Belton who scored from the low slot. Kelowna quickly replied with another goal from DeSouza, this time scored shorthanded. The Rockets tied the game at 3-3 halfway through the period as Adam Kydd picked up a rebound and scored on Tomas Suchanek.

With one minute remaining in the middle frame, Kelowna’s Colton Dach received a five-minute major and game misconduct for a check to the head on Americans forward Drew Freer. Tri-City was unable to score during the five minute power play opportunity as strong penalty killing controlled the game. Tri-City went 0/6 with a man advantage while Kelowna was 0/3 with each team scoring once shorthanded.

2023 NHL Draft prospect Andrew Cristall scored tonight’s game-winning goal at 7:18 into the final period with a wrist shot from the high slot over the glove of Suchanek. With 1:12 remaining, Kydd secured the victory for Kelowna scoring on the empty net for his second of the night.

Suchanek played in net for the Americans, turning aside 36 of 40 shots faced.

Ernst recorded his fourth three-point night of the season as he recorded a goal and two primary assists on his former team.