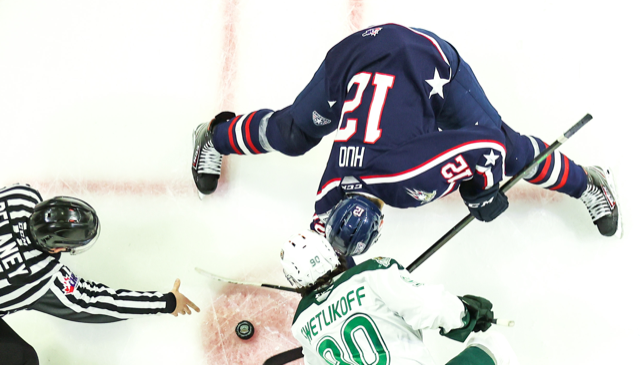 Kennewick, Wash. – After a series of postponed games due to weather and COVID-19 protocols, the Americans returned to play tonight in Everett. Tri-City struggled to shake off the rust as they fell 6-2 to the Silvertips.

Everett got on the board first tonight less than five minutes into the game with a goal from Jacob Wright. Their 1-0 lead held into the second period where they added four more straight goals from Jackson Berezowski, Niko Huuhtanen, Jacob Wright, and Alex Swetlikoff. Huuhtanen and Swetlikoff’s goals were scored on the power play.

The Americans got on the board with power play goal from Rhett Melnyk with 4:46 remaining in the second period. Jake Sloan gained control of the puck in the right corner and passed to Parker Bell at the point to set up the play. Bell fed the puck to Melnyk in the low slot area where he scored with a wrist shot over the glove of Silvertips netminder Braden Holt.

Scoring continued in the middle of the third period when the Americans added another power play goal to cut Everett’s lead to 5-2. Jake Sloan knocked in a rebound off a shot from Parker Bell for his 11th goal of the season.

Lukas Dragicevic also received an assist on Sloan’s goal for his 18th point this season.

The Silvertips added one last power play goal from Ronan Seeley to secure the 6-2 victory.

Five of the night’s eight goals were scored on the power play, including the final four straight. Tri-City went 2/5 with a man-advantage and the Silvertips went 3/6.

Tomas Suchanek played the full game in net for the Americans stopping 46 of 52 shots faced.