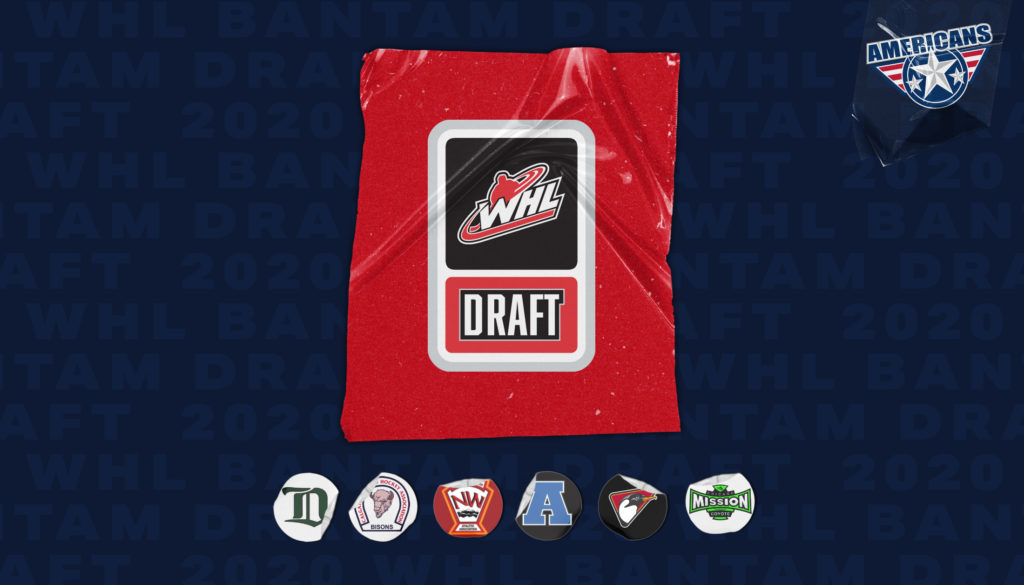 The new prospect group includes three defensemen and seven forwards from six different Bantam teams. Three of the players hail from Delta Hockey Academy including Tri-City’s top two selections. The Americans scouting staff found talent on both sides of the border selecting three players from British Columbia, three from Alberta, and four from the United States.

Two prospects, defenseman Lukas Dragicevic and forward Deagan McMillan, have already signed a WHL Standard Player Agreement with the Americans since the draft on April 22.

Americans Assistant General Manager and Head Scout Roy Stasiuk says the newly acquired talent builds on the 2019 draft and shows an exciting future for the Americans organization. Below are Stasiuk’s descriptions of each prospect and what Americans fans can look forward to seeing in Kennewick:

Stasiuk: “Lukas has good size, outstanding mobility and passes the puck like a professional, both in accuracy and velocity.  A right-handed defenceman makes him a special and much sought after prospect.  Add the leadership intangible and he’s a complete player worthy of being selected 4th overall.”

Stasiuk: “One of the bigger forwards in this year’s draft, Deagan combines skill with skating ability and a physical aspect to his game.  A solid competitor who embodies the definition of a power forward.”

Stasiuk: “Tanner captained the Calgary Bisons and his leadership ability was only surpassed by his skating and scoring ability and high hockey IQ.  A consistent performer who finished 2nd overall in Alberta Major Bantam Hockey League scoring and was a highly-coveted player for us.”

Stasiuk: “A combination of power, speed and elite scoring ability. Ben has an ability to score goals and more importantly, he’s a catalyst for his team as he scores important goals at important times.  Natural goal scorers are very hard to acquire so when you can draft a player like Ben its a huge bonus. Ben was a teammate of Tanner Gould’s with the Calgary AAA Bisons.”

Stasiuk: “A teammate of Lukas Dragicevic with the Delta Wild Academy, Carter is more of a defensive-minded player with an outstanding hockey intelligence and steadying influence for the entire team.  Big, mobile and efficient he plays with confidence and consistency.”

Stasiuk: “Like Tanner Gould, Drew captained his Calgary AAA team, the Flames, and followed up a 30 goal campaign with an impressive playoff.  An energy two-way forward who is responsible defensively and has the ability to score, Drew will elevate the pace of a game and be very hard to play against.”

Stasiuk: “Initially identified as an elite defender at a USA Hockey Camp in Colorado Springs, CO, Max went undrafted but certainly not unnoticed during the recent U.S. Prospects Draft.  The opportunity to select Max during the WHL Bantam Draft was not going to be wasted as Max is a big, strong defender who skates well and has a great shot from the offensive blueline and plays a very physical game in the defensive zone.”

Stasiuk: “A product of the Dallas Stars Elite hockey program, Slava is an underrated power forward who possesses excellent on ice vision to go with a skill set.  He’s adept at both shooting and passing and plays the game the right way and plays a complete two-way game.  One of the strongest players at the WHL U.S. Challenge at Kent, WA in February and a solid performer at the USA Hockey Western Prospects Camp at Colorado Springs in July of 2019.”

Stasiuk: “The Colorado forward plays for Chicago Mission and he’s an elite player and prospect.  Aspiring to be a professional hockey player, Payton is a much better player than his draft standing would indicate.  He was identified during the summer of 2019 as being a high priority draft prospect.”

Stasiuk: “It was a season of growth for Luke who is a teammate of Max Lightwood on former American, Erik Felde’s, Team Alaska U14’s.  Luke not only progressed as a player but he also physically grew several inches and his competitive, energy game is even better with the added size and strength.  A quality winger with good hockey sense, above average skills and a high compete level.”