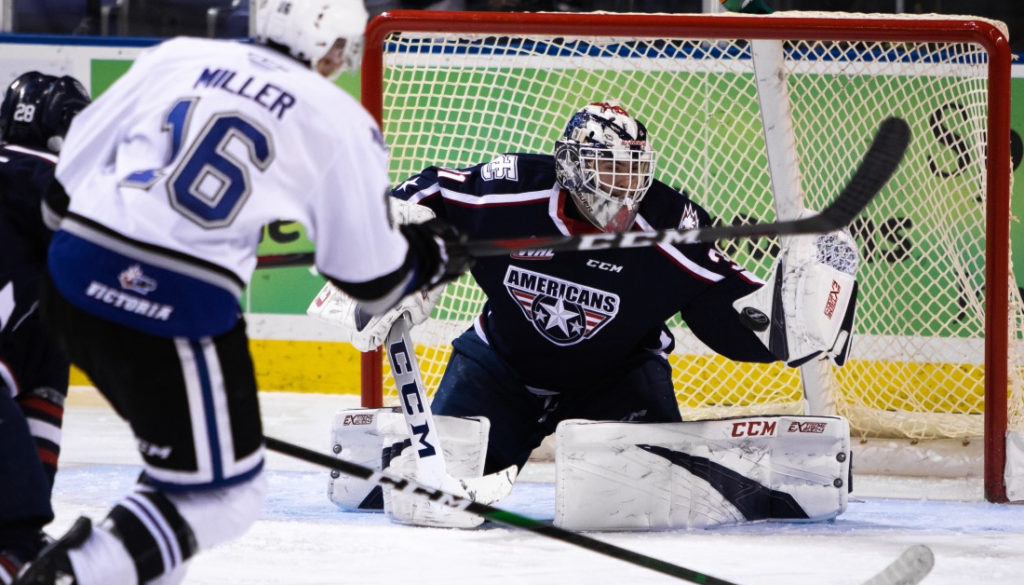 VICTORIA, BC – The Americans wrapped up their season series against the Victoria Royals today at the Save-On-Foods Memorial Centre. For the second night in a row, the Royals skated away with a victory over the Americans.

Once again, the Royals opened scoring. They scored the first goal in all four meetings with the Americans this season. Tonight it was Kaid Oliver giving Victoria the initial lead at 14:06 first period.

Americans defenseman Bryan McAndrews received a five-minute major for kneeing and game misconduct at 16:12. Victoria capitalized on the man advantage with a goal from Tarun Fizer extending their lead to 2-0.

The Americans were out shot 8-6 through the first 20 minutes.

After killing off the remainder of the McAndrews penalty, the Americans put themselves in the game with a goal from Colorado Avalanche prospect Sasha Mutala. Mutala’s goal, his 16th of the season, came off a pass from Krystof Hrabik.

The Royals scored four goals without response to secure their 6-1 victory.

Boyko has started every game in net for the Americans since 20-year-old goaltender Beck Warm was traded to the Edmonton Oil Kings. Tonight he stopped 30 of 36 shots faced.

Fizer added back-to-back goals to secure a hat trick for the Royals.

Three of Victoria’s goals came on the power play tonight. They finished 3/7 with a man advantage while Tri-City was 0/2.

2003-born defenseman Carson Haynes made his WHL debut tonight. Haynes was selected by Tri-City in the third round (58th overall) of the 2018 WHL Bantam Draft. He will continue with the team this weekend in Kamloops.