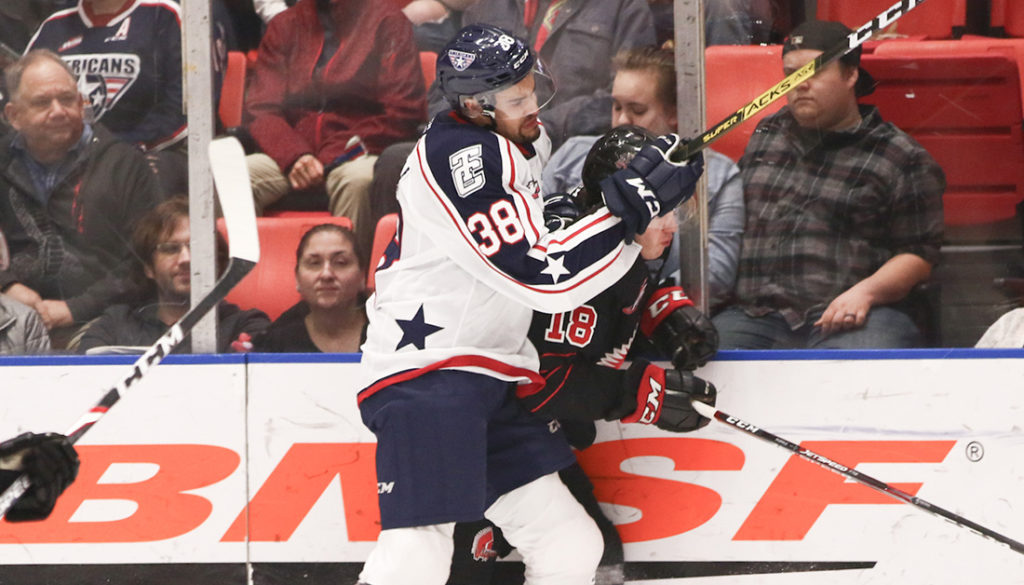 KENNEWICK, WA –  The Americans played their annual game against the Moose Jaw Warriors today at the Toyota Center. Colorado Avalanche prospect Sasha Mutala highlighted the game with a final second goal to record his first hat trick and seal a 5-4 victory for the Americans.

Mutala opened scoring with his 20th goal of the season 4:16 into the first period. He followed with a power play goal at 11:10 extending Tri-City’s lead to 2-0. Mutala was selected by the Colorado Avalanche in the fifth round (140th overall) in the 2019 NHL Entry Draft

Blake Stevenson furthered Tri-City’s lead to three with a shorthanded goal off a pass around the net from Sam Huo with one minute remaining in the first period.

Rookie netminder Mason Dunsford played the full game for Tri-City. He stopped 22 of 26 shots faced from Moose Jaw earning his first win at the Toyota Center.

The Americans struggled through the second frame allowing three Warriors goals, all even strength.

Moose Jaw took the lead 5:21 into the third period with a power play goal from Martin Lang.

Edge Lambert tipped a shot from Aidan Lawson to tie the game for Tri-City at 14:13.

The game-winning goal came from Sasha Mutala off a wrist shot from the high slot with half a second remaining in the game. The goal completed his first WHL hat trick.

The Americans are back at the Toyota Center tomorrow to take on the Spokane Chiefs. Tickets are still available for purchase at the box office or online from Ticketmaster here.