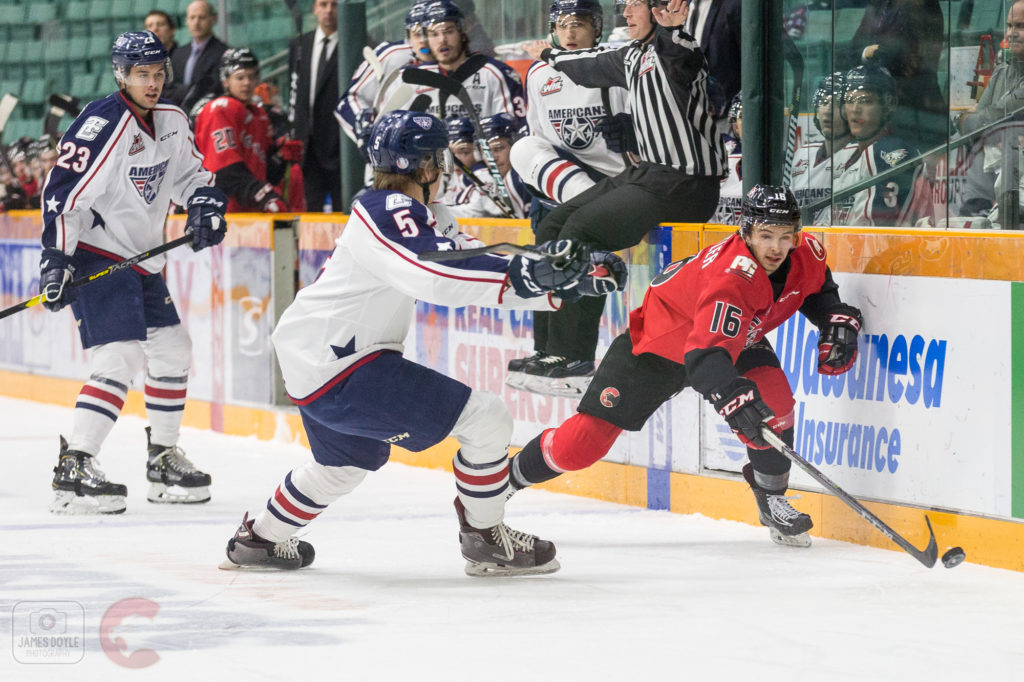 Tri-City extended their win streak to a season-high four game with back-to-back wins in Prince George this week.

The Americans had a rough start to this evening’s match-up against the Cougars. Forward Sam Stewart knocked the puck into Tri-City’s net directly after a penalty kill at 6:06. The goal was credited to Cole Moberg. Just 1:15 later Josh Maser scored to give Prince George an early 2-0 lead. The Cougars led shots 10-9 after twenty minutes.

Captain Nolan Yaremko put the Americans on  the board at 2:33 in the second period with a power play goal, assisted by Stewart and Isaac Johnson.

Prince George, whose power play is ranked last in the Western Hockey League, took back their two-goal lead at 10:35 when Rhett Rhinehart scored with a man-advantage. The Americans were out shot 16-9 in the second period.

Josh Maser high sticked Yaremko early in the third period giving the Americans a power play. Parker AuCoin capitalized on the opportunity at 1:22. Assisted by Johnson and Stewart, who also assisted the first goal.

Americans import player Krystof Hrabik was able to tie the game following a strong forechecking play from Sasha Mutala at 8:32. Regulation finished with a tied score of 3-3.

Tri-City struggled during 3-on-3 overtime. The Americans were unable to get a shot off during the five minute period. Mitchell Brown took a hooking penalty with 1:22 remaining in overtime. Tri-City killed off the penalty bringing the game to a best-of-three shootout.

Beck Warm stopped both of the shots he faced to secure Tri-City’s second shootout victory of the season. (Their first was a 6-5 home win over Portland on September 28.)

Tonight’s win earns Tri-City two points and will move the team into first place in the U.S. Division, tied with the Everett Silvertips.

Saturday the Americans will play game four of their eleven game road trip in Spokane.

Sasha Mutala’s overtime goal in Seattle is featured in this week’s CHL Showdown. VOTE for Sasha!